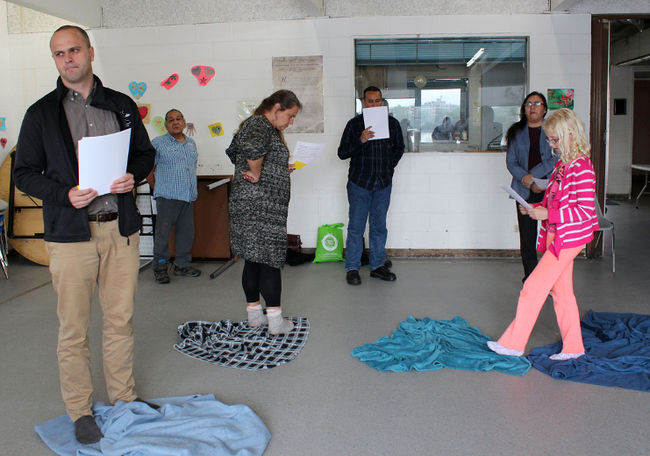 Originally published on Miner and News, by Kathleen Charlebois, on June 2, 2016

Participants in the roles of Canada’s Indigenous peoples navigate blankets that symbolize traditional Indigenous land in a blanket exercise held at the Kenora Fellowship Centre on Wednesday, June 1. Kathleen Charlebois/Daily Miner and News

A small group of people participated in a blanket exercise that tells the story of Indigenous peoples in Canada, but its impact was still powerful.

The Kenora Fellowship Centre held the exercise on Wednesday, June 1, wthe one-year anniversary of the Truth and Reconciliation Commission’s final report. The commission was a response to the generational trauma of the residential school system.

The government of Ontario also made an official apology for its treatment of Indigenous peoples on Tuesday, May 31.

Four blankets were spread out on the floor to represent Canada before European contact. Participants, both Indigenous and non-Indigenous, took off their shoes and walked around.

Tommy Keesick walked along the border of the blankets in a circle. “I was walking in one direction, in movement with the sun,” he said afterward when participants shared thoughts and emotions that the exercise brought up.

He explained that as a young boy, his grandparents taught him to wake up with the sun and go to sleep with the sun while out on the family trapline.

As narrators read through 500 years of history of European contact from an Indigenous perspective, the blankets slowly, then very quickly, got folded up into smaller and smaller bundles.

This symbolized the loss of traditional land, devastation from disease, separation from families through residential schools and the Sixties Scoop, and the lasting effects of those discriminatory policies.

There were moments of hope as corners were unfolded to symbolize activist Shannen Koostachin’s mission to improve on-reserve education and the movement towards reconciliation.

“The reconciliation process, I believe, should not end,” said Keesick, who is a residential school survivor. “It directly results in our treaty.”

He said he hopes education about the treaties will be incorporated into schools’ curriculum in order to create a better understanding and address misconceptions about them.

Cindy Melenchenko, who is a teacher, said she was interested in the blanket exercise as a way to learn and help Indigenous and non-Indigenous people “start walking a path that is going to be more harmonious.”

“I haven’t experienced residential school, but for me [reconciliation] means healing and trying to heal from the past and move forward,” she said.