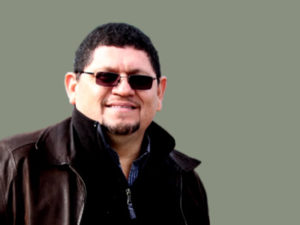 Global and Newcomer Coordinator
Toronto, ON - Territory of the Huron-Wendat, Seneca and Mississaugas of the Credit
Phone: 416.463.5312
Email

Alfredo Barahona, originally from Cuzcatlan, a Maya – Pipil territory part of what is now known as El Salvador, moved to Canada as refugee in the mid-eighties. He has worked with refugee and migrant communities through Toronto-based settlement agencies and now with KAIROS Canadian Ecumenical Justice Initiatives. Currently Alfredo is working on Indigenous Rights issues focusing on the development of meaningful relationships and solidarity between Indigenous peoples and newcomers to Canada. Alfredo has facilitated the KAIROS Blanket Exercise (KBE) extensively in English and Spanish through all of Canada including training KBE facilitators. Alfredo is responsible for the international work related to the KAIROS Blanket Exercise. Facilitating the effective and meaningful participation of affected communities in advocacy and solidarity work is a key principle in Alfredo’s work. As a tool for social change, music within a faith ecumenical and solidarity context, is an integral part of Alfredo’s life and social justice work.