Skip to content
Posted inArticles
Posted by By Connor Sarazin March 1, 2019No Comments 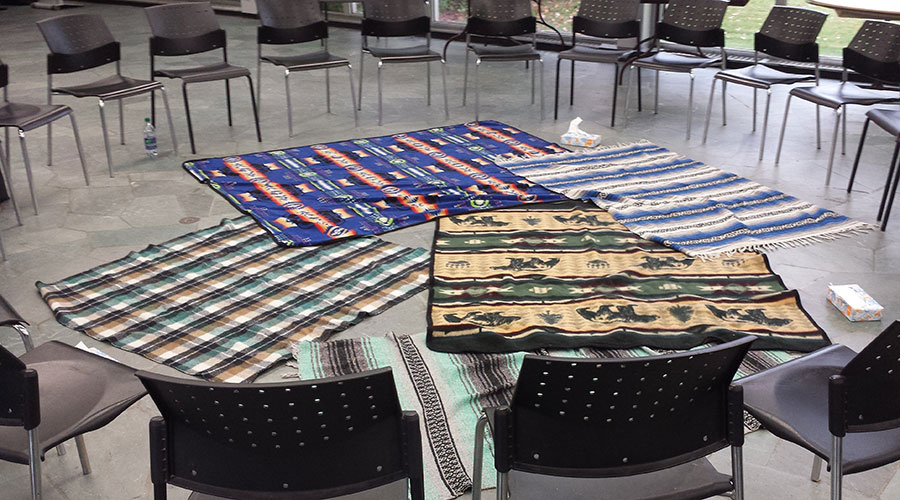 Shining a harsh light on the impacts of colonization

On a cloudy, fall afternoon at NAIT Main Campus, a circle of chairs are arranged around five patterned blankets laid flat on the floor. It’s a homey scene – one of the blankets shows signs of having been shared with a pet – but no one’s about to get cosy. Several boxes of tissues scattered among them suggest something serious is about to happen.

“It’s not a fun exercise,” Camille Louis tells the roughly 20 people who’ve gathered for the blanket exercise, held as part of NAIT’s annual Aboriginal Culture Day. It’s a day of celebration but, as would become clear over the next two hours, one that also guides toward the difficult task of reconciliation.

“There’s Kleenex for a reason,” says Louis, the Aboriginal liaison specialist from NAIT’s Nîsôhkamâtotân Centre, a support for Aboriginal and non-Aboriginal students alike. “Please use it.”

As participants find places to stand on the blankets, she and colleagues from the centre prepare to share the dark and rarely told story of colonization – a story I’d soon realize I understood very poorly. “It’s a brutal history,” says Louis, who’s Cree. Everyone goes silent and still.

Like many of the participants, which include NAIT staff, students and visitors to campus, this is my first blanket exercise. But it’s been happening around the country for more than 20 years, developed by an ecumenical group and recently updated to reflect recommendations of the Truth and Reconciliation Commission of Canada. This is the third time it’s been held at NAIT.

The exercise covers more than 500 years, but it’s more than a history lesson. It’s designed to put participants, including non-Aboriginals like me, in the place of North America’s first peoples, encompassing the point just prior to European contact to today.

At first, things are good on “Turtle Island,” or what some Aboriginal peoples called North America. Our blankets stretch wide: We have plenty of land, resources and each other, with whom we share our culture and traditions. Then, in the late-15th century, the first Europeans arrive.

As the story progresses, Louis and her colleagues fold in corners of our blankets, taking our land from us. We become uncomfortably crowded as we try to hold our places. That’s when our numbers begin to drop.

We become uncomfortably crowded as we try to hold our places.

Some of us are killed by things like illness, war and loss of land. One woman is told not to leave Turtle Island but to step off of her blanket. She’s a victim of the Sixties Scoop, a government-sanctioned practice in which Aboriginal children were removed from their homes and placed in foster care. For a number of reasons, she’s unable to reintegrate into her community when she finally returns home.

By now, tissue boxes are being passed from person to person.

As for me, I’m identified as Shawnadithit, of the semi-nomadic Beothuk, who fought to extinction with Europeans in Newfoundland. I die of tuberculosis in 1829, the last of my people.

In the aftermath of a “brutal history” 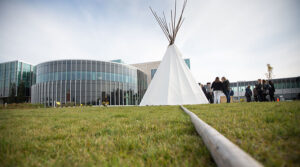 It turns out that all the things I didn’t know about colonization could fill, well, the facilitators’ 10-page script. I learned, for example, that

The exercise also shows me how ignorant I am, which makes me angry at and disappointed in myself.

There’s more, much more. But it’s enough to say that being part of the exercise also reveals how ignorant I am, which makes me angry at and disappointed in myself. Blaming a grade-school curriculum riddled with omissions is just an excuse. The responsibility – and obligation – to learn these truths, I realize as I sit outside Turtle Island and listen, is mine.

But, as bleak as it is, the exercise also suggests that a lot of good will come of taking that on, and that the key to not repeating the past lies in knowing it. Change is possible, maybe even happening. The blanket exercise shows me that it’s still not enough, that change is slow, but there’s hope.

That becomes especially clear after we sit to share our feelings about what we’d experienced. We go around the circle, and more tears are shed as the discussion focuses on loss. Many participants – some Aboriginal, some not – have family or friends who’ve suffered from being deprived of their homes, loved ones and culture, and from various forms of abuse.

When it comes time for one of Louis’ colleagues to speak, she talks about her brother. As a kid, he’d been picked on at school for his long hair, which their dad insisted he keep. He was pushed, essentially, to renounce who he was.

But with her own kids, things are different. She has them in a school where they can embrace their identity, explore it. They “perk right up,” she says, when they get to learn about their culture. They know Cree words that she doesn’t. And her son is growing his hair out by choice. It’s getting long enough that she’s able to braid it before he goes to class.

People in the circle smile through their tears. So does Louis’ colleague as she dabs at the corners of her eyes. “I feel like I’m doing something good,” she says.

The outsider insider perspective- how a KBE changed me