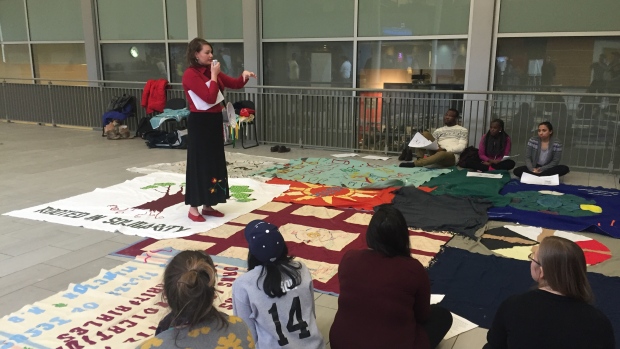 As part of a new month-long awareness campaign, indigenous students at Carleton University hosted a special event that uses blankets to teach about Canadian history from an indigenous perspective.

Known as the “blanket exercise,” participants stand on blankets that represent the lands inhabited by indigenous people that eventually became Canada.

“They pretty much tell the story of how the land mass of North America was populated by indigenous people, and then slowly, because of population crashes and them being forced onto reserves, you can see how much land was sort of lost because of settler encroachment,” said Ashley Courchene, Carleton student and coordinator of the student union’s Aboriginal Service Centre. 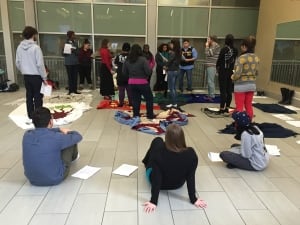 The blanketed area becomes smaller as the facilitators lead participants through a historical timeline.

Facilitators pull back and remove the blankets as they guide participants through a historical timeline that includes the treaty-making process, residential schools and other events that impacted indigenous people in Canada.

Facilitator Gabrielle Fayant called the exercise a “reconciliation tool that tells the untold story of the northern part of Turtle Island, which is Canada.”

The blanket exercise was first developed by the organization KAIROS in the late 1990s as a response to the report of the Royal Commission on Aboriginal Peoples, and it’s been gaining popularity as a teaching tool in recent years.

“Although I’ve learned about the history of colonization throughout my indigenous studies minor, having a visual representation of the destruction of their lands, cultures and way of life makes it much more real,” she said.

“Especially to those who have not learned much about the history of indigenous peoples other than from a colonial perspective in high school.”

Tuesday’s blanket exercise was part of a new campaign spearheaded by indigenous students at Carleton called RISE 2016, which stands for Revitalizing Indigenous Strength and Education.

It features film screenings, art exhibits and live music throughout the month of January. 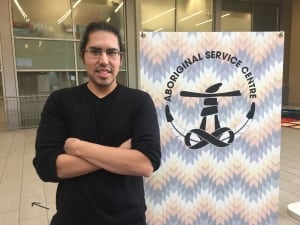 “I feel that a lot of the time, our narratives aren’t taught in school,” said Courchene, who helped program the campaign. “And if they are, it’s kind of like chapter one, ‘There were natives,’ and chapter two, ‘They were gone,’ and, ‘Hooray Canada.’ So this is just to sort of bring a new perspective, a new twist to the narratives that we often hear.”

Like the blanket exercise, all RISE 2016 events are free and open to the public.

Most common question asked is “Why didn’t I know this history?”. KAIROS Blanket Exercise Tells the Indigenous Story in Saskatoon.