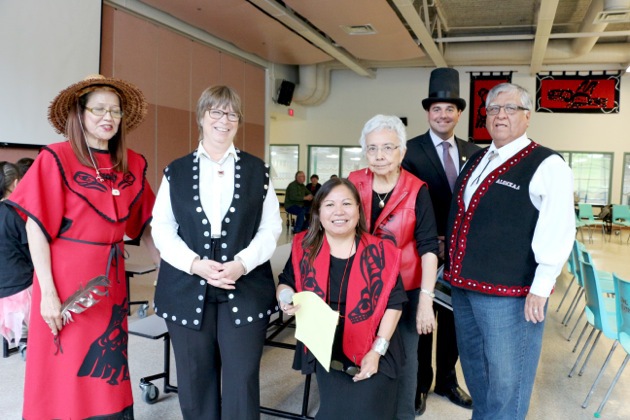 Originally posted in The Northern View on June 9, 2016 by Shannon Lough

It’s been a year since the Truth and Reconciliation Commission released its report and to honour that anniversary 30 Aboriginal and non-aboriginal North Coast residents participated in a blanket exercise on June 1.

The blanket exercise isn’t new, but it is to the Prince Rupert community. The language and culture teacher at Charles Hays Secondary School, Donna McNeil-Clark, learned about the interactive — and emotional — activity through Wapsigatgyet and the B.C. Teachers Federation.

“One of the things we focused on is to get the community focused on their own history,” McNeil-Clark said. “It’s not just about residential schools. I want to educate everyone here on the bigger picture, especially the youth because they’re the ones who are going to be making the decisions in the future.”

In addition to a group of youth from the Friendship Centre, along with elders, Prince Rupert Mayor Lee Brain also attended. He wore a suit and a black top hat and portrayed the role of a European in the historical narrative.

“We’re starting a process of reconciliation,” Brain said. “Today is just a small gesture of the process we’re about to take.”

There were chairs lined up in a circle and the participants were in the centre with a blanket for two to three people. Everyone spread their blankets around the floor filling the space — including this reporter.

I took part in the activity to fully comprehend the exercise.

At first, I had to share a blanket with a Tsimshian elder who I’d never met before. Within the first few minutes of receiving our blanket, our map and our scrolls to read along with the narrative, we were bonding.

McNeil-Clark and Eileen Smith read the historical narrative from the First Nations perspective while Brain read as the European colonizer and politician.

Brain would walk by and fold sections of our blankets to give us a sense of the loss of land. Then he’d hand white or yellow cards to some people.

The woman I shared a blanket with was given a white card along with half of the room, and those people were told they died from disease that spread from first contact with the Europeans, and she was sent to sit in one of the chairs away from our blanket.

Later, when my blanket was no more than a pillow-sized square to stand on, I was given a yellow card with an X marked on it.

The card was my ticket to a residential school and I had to go to a blanket in the corner of the room along with the other people with yellow cards.

My X-marked card also meant that I died while at the school, so I joined my new friend as one of the victims of colonization and assimilation.

There were few people left on the folded blankets by the end of the exercise.

When we decompressed after and shared what we experienced it was heartfelt and moving for many.

What I ended up feeling throughout the exercise was a gradual stripping of identity. I studied Canadian history in university and was already aware of what happened to First Nations people after colonization, but the blanket reenactment placed me inside the history for an evening.

Many more of these blanket exercises happened across the country the same time, including Toronto, Regina, Whitehorse and Charlottetown.

The exercise is part of an initiative by KAIROS, a faith based organization, and its Winds of Change campaign, which seeks reconciliation through education.

The blanket exercise was the first scheduled event by the Winds of Change in Prince Rupert, with more to follow this year.