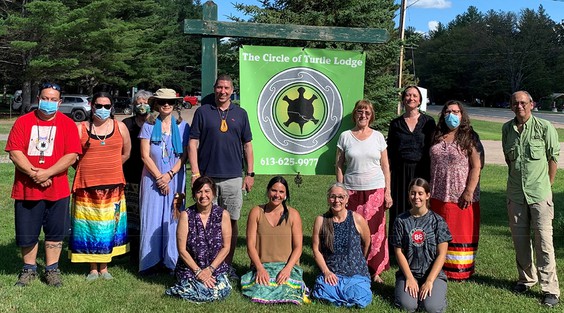 The workshop was conducted at The Circle of Turtle Lodge’s headquarters in Deacon, wrapping up on June 30. It is part of a new three-year partnership with Kairos Canada.

“Truth must come before reconciliation,” said Aimee Bailey, spokesperson for The Circle. “Many Canadians still don’t understand their part in our history that needs to be resolved. This training will help us to educate local people about the true history of this area.”

The Circle of Turtle Lodge is a politically independent, Indigenous Not-For-Profit Organization, whose members are all of Indigenous heritage. The Circle was established in 1999 to revive, promote, and restore Traditional Anishinabe Culture in the Ottawa Valley; in 2005 it became a registered charity.

In addition to offering teaching circles and ceremony to their members, The Circle of Turtle Lodge also provides cultural education seminars to the public on Anishinabe history, culture, and philosophy, some of which can be seen on their website at https://thecircleofturtlelodge.ca/culture‐language/cultural‐education/ .
The group has also partnered with the Algonquin College in Pembroke in an exciting project to indigenize the campus, in addition to providing cultural education in an annual Indigenous History Month held each January since 2017.

Kairos is a joint venture ecumenical program administered by the United Church of Canada. In 1996, their Aboriginal Rights Coalition worked with Indigenous elders and teachers to develop an interactive way of learning the history most Canadians are never taught. The Blanket Exercise was the result; it has since been offered thousands of times and is now offering a fifth edition.

he Blanket Exercise is based on using Indigenous methodologies and the goal is to build understanding about the shared history of Indigenous and non-Indigenous peoples in Canada by walking through pre-contact, treaty-making, colonization and resistance. Everyone is actively involved as they step onto blankets that represent the land, and into the role of First Nations, Inuit and later Metis peoples. By engaging on an emotional and intellectual level, the Blanket Exercise effectively educates and increases empathy. The exercise always concludes with a sharing circle.

You may schedule The Kairos Blanket Exercise for your organization in the Renfrew area by contacting The Circle of Turtle Lodge by phone at 613-625-9977 or by email: info@thecircleofturtlelodge.ca .