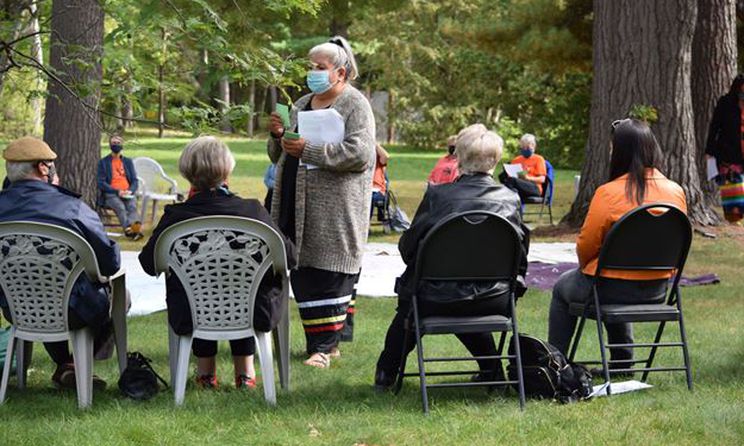 A profoundly emotional experience unfolded at the Galilee Centre during the National Day for Truth and Reconciliation.

“People were deeply moved. During the process, there were tears and some had to step back,” said Gerry Kelly, manager of spiritual programs. “The blanket exercise is a tool to allow people to hear the story and feel the impact, at least for the moment.”

Developed by Kairos, an ecumenical justice organization, the blanket exercise shows history from an Indigenous perspective. Inside the circle of chairs, the 40 or so participants found a piece of blanket to stand on and imagined that it was their pre-contact land. They learned of culture and trade, then of caring for the earliest European settlers. Gradually, as colonization advanced, the blankets were quietly taken away, while talk of disease, treaties made and broken, residential schools to the ’60s scoop, periods of resistance and resurgence, took over.

Participants, upon returning to their chairs, felt the separation from one another and the modern versions of colonial tools of oppression: foster care, imprisonment, poverty.

“It goes on,” Kelly said. “It’s the same logic with different institutions.”

He said having five Mohawk elders participate (they were on a spiritual retreat in Galilee, yet agreed to join in) made the event even more powerful. Among the most moving moments, Kelly said, was when they discussed the victims of residential schools, the children buried in unmarked graves.

He is ambivalent as to whether or not Canada is undergoing a change. He said the Indigenous population is the youngest and fastest-growing, and it retains 80 per cent of the land mass. Change will happen, but whether it is good or bad remains to be seen.

“I can be extremely hopeful some days and some days I can be devastated,” he said. “The offer of this moment is that change will happen with reconciliation. At another moment it might not. That might sound ominous.”

This is the second time Galilee has hosted a blanket exercise. It will likely do so again.

For immediate assistance to those who may need it, the National Indian Residential School Crisis Line is available 24 hours a day at 1-866-925-4419.