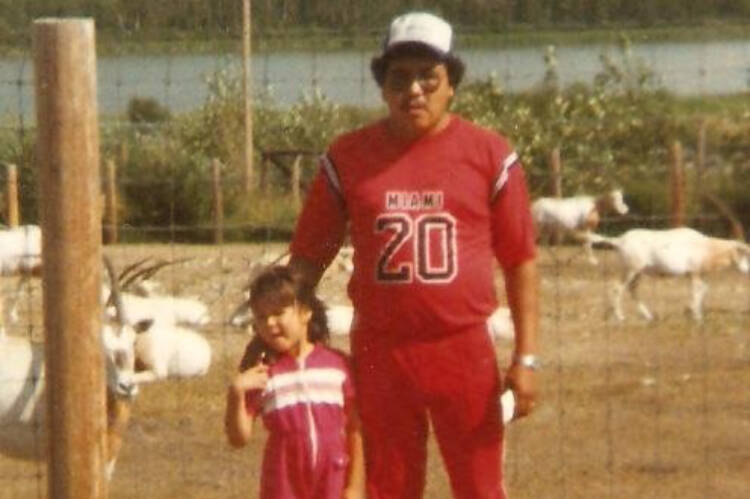 This article describes abuse endured by children at residential schools that may be triggering. It mentions suicide and violence against children including sexual, physical, mental and emotional abuse.

The things Tina Savea learned about her dad after his death make her stronger today.

The schools were just a part of life and more family members attended than not.

“I didn’t know, I didn’t understand the real horrors that went on in these schools,” Savea said.

The North Saanich resident spent most of her childhood on the Keesekoose First Nation, where her father’s family hailed from.

Savea was visiting her mom in Saskatchewan on Feb. 15 when the Keesekoose announced ground-penetrating radar had showed 54 potential graves at St. Philip’s and Fort Pelly, two former residential schools near Kamsack, Sask. Savea watched the announcement online with her mom at her side.

It was helpful being in her hometown having a potentially last visit with her grandfather, talking and sharing stories with aunties and her mom. “There’s strength in that, in just being together.”

St. Philips was the day school Savea attended much of her life and graduated from in 1997.

“I think that was a big thing for me … realizing that I was running around on this ground, that there was remains of children under our feet as we were running around and playing tag.”

The real impact of the schools hit Savea, as it did many, once stories began emerging from the Truth and Reconciliation Commission. While her father was among the 6,500 witnesses to share his residential school experiences, he didn’t share them with family.

At the time, Keshane took his daughter aside and explained he was going to a hearing to share his experiences and that he didn’t want family there.

After the hearings his life spiraled out of control.

“His whole life he’d pushed it down, hid it and just made do,” Savea said. They had no idea about his private battle.

After his death Savea learned he was among the children who faced myriad abuses, including sexual, at residential school.

At first she was angry – at everyone, including him.

But it painted a clearer picture of her dad, who had good times but was also a troubled, broken man trying to keep it together his whole life.

At his funeral she made a decision. “I was going to be his voice. Be that little boy’s voice and share his truth.”

About six years ago, she became a facilitator of the Kairos Blanket Exercise, an experiential workshop that explores the relationship between Indigenous and non-Indigenous people in Canada. Blankets on the floor represent land and participants are invited to step into the roles of First Nations, Inuit and Metis peoples.

“I love doing that, but a part of it is because every single time I do it I get to share my dad’s story,” Savea said.

At first she worried Keshane, a private man, wouldn’t be pleased. It’s a question she faced privately for years.

During the inaugural National Day for Truth and Reconciliation on Sept. 30, 2021 she was overcome by a feeling he was with her. She heard him in her soul and believes he is whole, happy and proud of her for giving the little boy a voice.

“I feel like there’s a big wall … we just don’t understand each other.”

Savea suggests the best resource to begin to understand, and make a real commitment to change, is to find and read the 94 Truth and Reconciliation Commission of Canada: Calls to Action.

“You can never fight hate with hate, it can only be done with love.”

Support for former residential school students and family members are available by calling the Indian Residential School Survivors Society at 1-800-721-0066.