Skip to content
Posted inArticles
Posted by By Connor Sarazin November 7, 2019No Comments 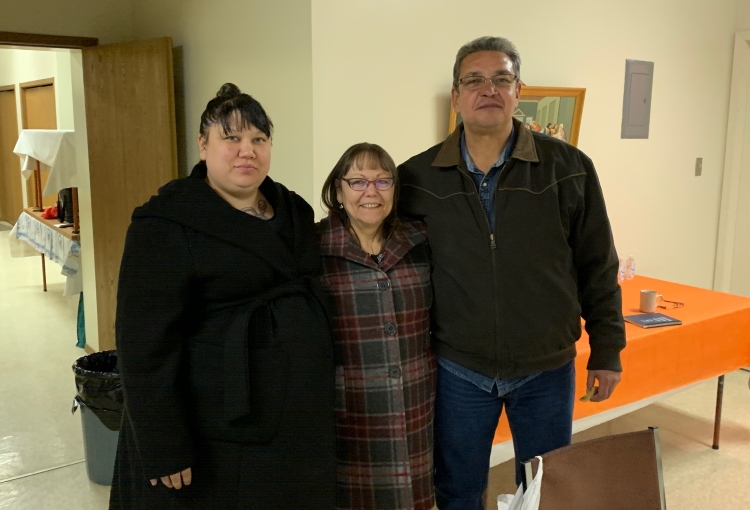 The Blanket Exercise is an experiential learning activity that traces the impact of 500 years of colonialism on indigenous people in the country. Rather than experiencing a lecture or audiovisual presentation, participants were marshalled to the centre of the room to stand on a series of blankets.

Lorraine Bellegarde is the part-time coordinator for KAIROS Canada. The aim of the exercise is straightforward in Bellegarde’s view.

“We hope that people all across Canada will become more aware of the 500 years of shared history that we’ve had in Canada, and not what was glossed over or what we have been told — the real history of Canada.”

Along with Lorraine’s daughter, Sadie Anderson who acts as a facilitator and narrative presenter, Tim Poitras of the Muscowpetung First Nation joins in as the knowledge ceremony maker. Poitras interjected at intervals throughout the afternoon with additional research, background information, and most importantly, critical cultural information that helped to frame the experience within the indigenous spiritual and social context.

The ninety-minute narrative had participants listening to the chronological string of events throughout the centuries that led to the decline, disruption, and redistribution of indigenous populations. The participants standing on the blankets representing these populations were variously removed or relocated during the course of the narrative.

In the case of the Beothuk people of Newfoundland who were declared extinct during the 1800s, several participants were removed from the blankets and retired from the group. The narrative continued to reflect the redistribution of entire First Nations as colonization continued. Again participants retired from the circle or were directed to other zones. The exercise worked its way geographically west and north as encroachment continued. Each time, fewer and fewer participants were left in the circle and the blankets on the floor, representing the original territories the First Nations communities agreed through Treaty to share with Europeans, became smaller and smaller.

Perhaps the most haunting impact came in the wake of the residential school system and the “Sixties Scoop” whose impacts have only recently begun to be redressed. At the end of the exercise, only a handful of participants remained standing on the shrivelled areas left, some disconnected from the central community as a sad reminder of the social fracturing and individual poverty and hardship evident in Canada today.

The narrative was delivered as the three facilitators circled the participants, many of whom stood through the ninety-minute delivery. The effect on the participants was profound as evidenced by many of the comments shared during the talking circle at the end of the afternoon. Numerous participants were emotional and visibly impacted by the experience. Continue reading this article on Discover Humboldt.

This was written by Maury Wrubleski and published on Nov. 4, 2019 on https://www.discoverhumboldt.com