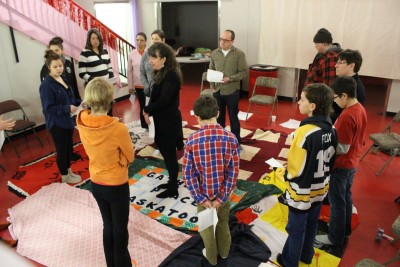 Last month in Calling Lake the KAIROS Blanket Exercise continued its journey as a tool for healing and relationship building. The two-day process was initiated by this predominantly Indigenous community in northern Alberta and about twelve members participated by weaving their history and unique perspectives into the Blanket Exercise.

Four grade seven students and two staff from a school in the neighbouring town of Athabasca were invited by members of the Calling Lake community to join them in taking these initial steps, which included participating in the Blanket Exercise, debriefing and sharing personal experiences. Much of the oral history shared during the gathering will be integrated into the Calling Lake Blanket Exercise.

Check out some photos from this KAIROS led session on Facebook.

The community will present its powerful adaptation of this popular teaching tool at Education Days on May 20-21 when more than 500 students from the surrounding area will visit Calling Lake to learn about residential schools and other impacts of colonization.

Brian Cardinal (Sakāwiyiniwak ) was part of this Blanket Exercise process. He is a storyteller, hunter, trapper and respected member of the Calling Lake community. Last year he held a winter camp for the youth to pass on his storytelling skills. His stories help people make sense of the things that happen and he shares them on his page ‘Where the Prairie Chicken Belly Hangs‘.

Here is the story he wrote about the Blanket Exercise experience in his community:

Summoned to the fire, they came. Elders, gatherers, warriors, women and even children were asked to join the circle around the fire. They were not sure why but it must be urgent. They sat around the flames, questions in their eyes as to why they had come.

A woman walked into the light.

“I have asked you all to come together “, she said, determination in her eyes,” to remember who we were and are”.

She took a pipe out of a bag and showed it to all.

“This was handed down from generation to generation “, she said as she showed the bison bowl and obsidian stem. All eyes drew upon it.

“It is cracked”, she said in a sad voice.

The others stole glances at one another, shock upon their faces.

“Although the stone is very strong, the Spirit within has been damaged. We must work together to give it strength so it can heal”.

“How can we do this?” Asked one of the gatherers.

“We must heal the memories that have overflowed within it”, she answered, ” we must remember the past, work through it and remember why we are here”.

“The memory of the people will heal the pipe?” Asked the children.

“The pipe will heal when we remember who we are”, said the Elder, understanding now what the woman was saying.

The group began to recall past tales that were handed down to them from Elders and storytellers before. How lives were lost in battles with different enemies and how ancestral lands became lost. Warriors remembered losing brothers from enemy raids, finding broken bows and empty quivers where once there was laughter and bravery. The woman thought of the children that were taken and never returned, eyes overflowing with tears. Elders remembered the rich lands that fed their people, only to be forced to leave. They couldn’t understand how someone could take something that belonged to no one. The children listened intently.

The crack in the pipe began to pulse a dim light. The woman showed it to the people that gathered.

“The spirit is returning but it will take time to heal”, she said, ” awaken your own and everyone else around you. This will help mend your own and those ahead of you. Remember who you are and where you came from. Do not forget that your blood runs, not only in your arms but flows through the veins of Mother Earth herself. The pains of the past will guide you so that you can make changes that will prevent it from ever happening again. Teach, tell, remember. The spirit will return “.

The group would remember.

Wisdom, One of the 7 Grandfather Teachings