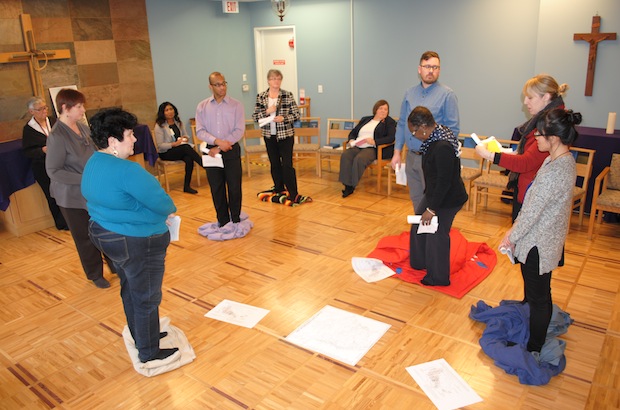 Staff at the office of General Synod take part in the Blanket Exercise, a teaching tool in Indigenous Canadian history, at the Chapel of the Holy Apostles February 17. Photo: Tali Folkins

By Tali Folkins on February, 24 2016, originally appeared in Anglican Journal

On a mid-February afternoon this year, the Chapel of the Holy Apostles in the Anglican Church of Canada’s national office in Toronto was host to an unusual activity.

The chairs were pushed to the side, and in their place a half-dozen blankets lay spread on the floor. On these blankets some 15 people—General Synod employees and a few invited guests—paced or stood while two organizers read aloud about the historical plight of Indigenous people in Canada.

The activity, known as the Blanket Exercise, is a teaching tool developed by ecumenical social justice group Kairos Canada. The point is to foster reconciliation between Indigenous and non-Indigenous people in Canada by allowing participants to experience Canadian Indigenous history in an interactive way.

In the exercise, participants represent Canada’s Indigenous people and the blankets represent their land. At the beginning, all the blankets are fully unfolded and laid end to end, and participants wander freely over them. Two readers, reading aloud from prepared scripts, describe key moments in Canadian Indigenous history. As they do so, the blankets and the arrangement of participants are adjusted accordingly. By the end of the activity, only a few participants are left standing. Meanwhile, the blankets have been either folded into smaller piles or removed, so that the original expanse is now a small number of isolated blanketed spots, symbolizing how Canada’s Indigenous peoples have suffered and died in great numbers and how much land they lost as the history of contact with Europeans progressed.

An increasing level of awareness in recent years of the UN Declaration on the Rights of Indigenous Peoples, and the focus on that declaration by Canada’s Truth and Reconciliation Commission, have spurred interest in the Blanket Exercise among all kinds of associations, says organizer Henriette Thompson, director of public witness for social and ecological justice for the Anglican Church of Canada.

“KAIROS is completely stretched trying to keep up with all the requests to facilitate the Blanket Exercise in schools and unions and governments,” Thompson says. “Everybody’s asking for training in it now.”

Its growing popularity was one reason why to Thompson, the time seemed ripe to bring a Blanket Exercise workshop to Church House.

The workshop seemed to provoke a variety of feelings in those who took part. In an interview, Eileen Scully, the church’s director of faith, worship, and ministry, said that, toward the end, as one of a few participants left standing, she felt lonely in a very immediate way. On the other hand, one moment—when a reader told participants about Indigenous youth activist Shannen Koostachin, then asked them to unfold a corner of their folded-up blankets—made her feel joy in the strength and resilience of young Aboriginal leaders.

Church corporate communicator Matt Gardner said the feelings he got at the beginning of the exercise, when participants were walking around freely, and at its end, when they stood apart on tiny pieces of carpet, contrasted sharply.

“It was the difference between feeling free and feeling like a prisoner,” he said in an interview.

One hope Thompson says she has for the exercise is that it will be used in schools. One of the 94 Calls to Action to come out of the Truth and Reconciliation Commission, she says, is for the implementation in schools of a mandatory curriculum on treaties, residential schools and the contributions of Indigenous people to Canada, of which the Blanket Exercise could easily be a part.

“It is an excellent educational tool,” she says. “People get it after they’ve gone through it.”

Most common question asked is “Why didn’t I know this history?”. KAIROS Blanket Exercise Tells the Indigenous Story in Saskatoon.