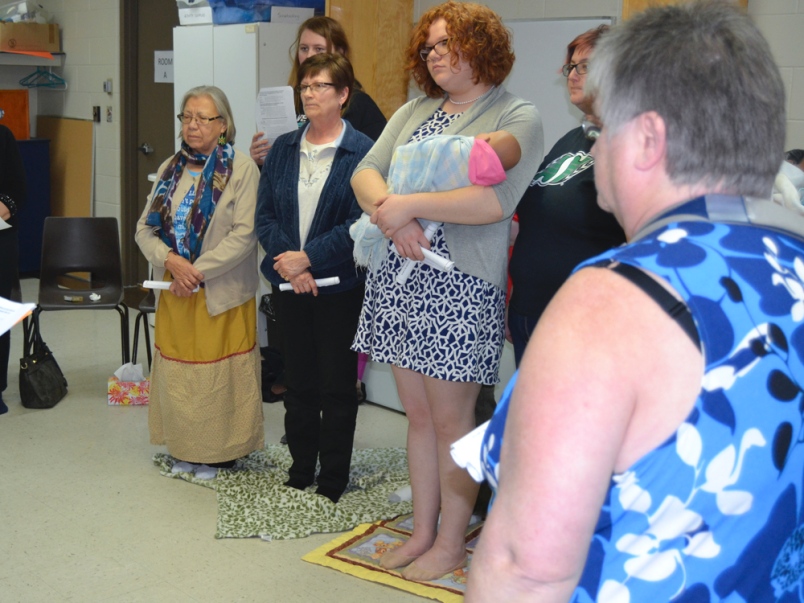 For the Blanket Exercise, the floor of an activity room in the Estevan Public Library was covered in blankets that were removed until only a few were left. The blankets represented the culture and lands of indigenous peoples.

A teacher and students from Fort Qu’Appelle paid a visit to the Estevan Public Library to teach an important lesson to guests.

The Blanket Exercise is a historical process that involves covering the floor with a series of blankets that symbolize the territories originally held by the indigenous people. Guests were told to stand on the blankets, each of representing First Nations.

What started out as a simplistic and informative activity quickly became somber and blunt as it unapologetically revealed the harrowing history of hardship and oppression the indigenous people of Canada have faced, since the land that became Canada was colonized by European settlers. There was a focus on the threats that aboriginal culture has faced since the Europeans colonized the land.

Many of the blankets were eventually folded and taken away, with the participants eventually sitting down or stepping away to represent the death, violence, and decrease in status and freedom aboriginal people have faced throughout history.
Guests were given scrolls to read excerpts of the aboriginal history in Canada that lead through each challenge aboriginal peoples have faced, recounting, in exacting detail, the dispossession of lands and the creation and violation of treaties between the Canadian government and First Nations.

Subjects like residential schools, alcoholism, the disproportionate violence and danger aboriginal women in particular face and institutional racism were all visited through the historical exercise.

The event was emotionally strenuous for many of the guests and even some of the students carrying the exercise out. Many of the people involved found a great deal of meaning in what took place, because it brought back memories of the personal struggles they or their loved ones have faced, in the face of colonialism and the legacy it has created for aboriginal people.

Poitras was overcome with emotion, since she, a survivor of many of the oppressions and forms of violence depicted in the exercise, had many memories revived by the recounting of history it entailed.

“This is something that is very unique. I’ve never seen it done before. People need to see it; students need to hear it,” said Poitras. “It’s different from when you teach it from a book. You feel it when you are part of it.”

Because of the strong emotional impact the exercise had on many of the people involved, there was a talking circle held after the exercise, so that people could express how the struggles of indigenous people as a whole tied into their life experiences.

“This was extra special because we had Elder Alma here. Everything heightens in the presence of an elder,” said Koops.

Koops said she believed everyone present at Thursday’s event was eager to learn. She noted that she and the students with whom she presented have been travelling all over the province, doing the Blanket Exercise at schools, libraries, for an education class at the University of Regina and at the Royal Saskatchewan Museum.

“It’s pretty powerful when young people speak to such things,” said Koops. “There are often tears. Indigenous people have lived it and it’s like reliving it. As for non-aboriginal people, sometimes it’s the first time they’ve heard this side of the story, and that can be emotional.”

Koops noted that the goal of the Blanket Exercise is to impart a harsh truth, and also work with that truth to create a better future, improving the relationship with aboriginal people in Canada, by honouring the treaties.