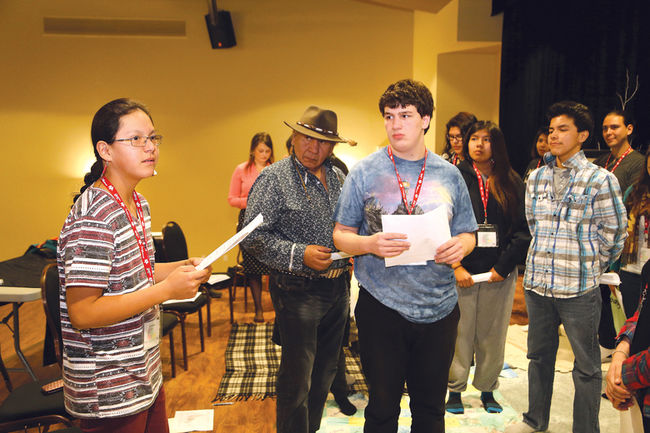 As Josh Lewis spread blankets across the stage at the Steelworkers Hall on Thursday, a casual observer might have thought he was preparing a spot for a mid-morning snooze.

But Lewis planned to open eyes, not close them, through an activity known as the Blanket Exercise, one of several workshops at the Canadian Roots Exchange’s fourth annual national youth conference, held in Sudbury until Saturday.

The blankets represent the lands of what is now Canada, and the distinct cultures and nations living on those lands. Participants represent the indigenous First Peoples, who move onto the blankets, and move back in time to the arrival of Europeans.

With the help of a narrator and a script, they spend about an hour re-enacting the history of treaty-making, colonization and resistance in the country that became Canada.

“It’s a reconciliation tool,” Lewis said. “Participants learn about 500 years of colonization in this interactive activity, where they take the role of an indigenous person and go through history. They start off on these blankets, which represent the land, and through colonization, and through the exercise, you see how the blankets are taken away and how the land becomes smaller.”

Participants in the CRE conference aren’t only focused on the past, however. The theme of this year’s event, which brought together more than 200 indigenous and non-indigenous youth from across the country, is Niigaanzhaadaa – translated to English as Moving Forward Together, or to French as Avancons Ensemble.

CRE is a group Indigenous and non-Indigenous youth who stand in solidarity to promote respect, understanding and reconciliation between all peoples in Canada.

Through exchange programs, workshops and gatherings, they strive to dispel stereotypes, create spaces for open dialogue and facilitate reconciliation through youth.

The Sudbury conference falls only a few months after the final report from the Truth and Reconciliation Commission of Canada, organized by the parties to the Indian Residential Schools Settlement Agreement, was released in December.

“It’s an important time right now, for indigenous and non-indigenous people to respect each other’s culture, respect each other’s identity, respect the uniqueness of everyone and work together to create harmony, a better Canada, where everyone’s happy and everyone’s living a positive life,” said Lewis, a former Sudburian living in Ottawa, with roots on the Wikwemikong First Nation on Manitoulin Island. “That’s what this is all about. It’s bridging all different cultures, not just indigenous cultures, because there are so many cultures in Canada, so it’s good to have representation from every culture here.

“You see that here – there are so many nations here and it’s a really great atmosphere.”

That’s what CRE executive director Vibhor Garg was hoping for. This year’s conference is a special one for him, as he also grew up in Sudbury.

“It’s our fourth conference, our first one in Ontario and first time in a smaller town, and I actually grew up in Sudbury, so for me, it’s pretty exciting,” Garg said. “I think it was really needed. We need to have dialogue about this stuff.”

“The idea is to bring together indigenous and non-indigenous youth and do workshops and leadership programming and move forward together, because the reality is we all live on this land and we have to find a way to be more respectful and positively work together,” Garg said.

Jessica Alegria, a CRE program officer, travelled from Saskatoon for the event, but her journey to Canada began much further away.

Alegria was born in Texas to refugees from El Salvador.

“My family emigrated to the United States and we were there undocumented,” she said. “We were brought, thankfully, to Canada because we weren’t safe in the United States either. So I was raised with those cultures, but – and this ties into CRE very much – my parents were quite removed from our indigenous culture, from the territory that we’re from in Central America, for similar reasons of colonialism.

“That’s the thing, you always find common ground once you start talking and that’s all it is, creating safe space, inclusive space and just getting a chance to talk about these things.”

For more information and a full schedule for this year’s conference, visit www.canadianroots.ca.

Originally published in the Sudbury Star, Thursday, March 17, 2016 and written by Ben Leeson