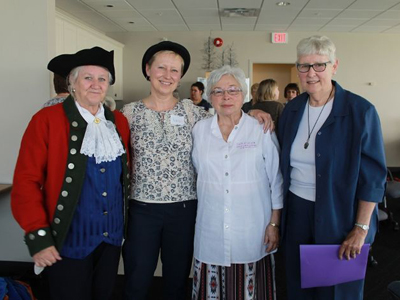 Originally published in Sarnia This Week on April 26, 2016

Kathleen Lichti unrolls a scroll and begins reading out a somber, solemn story in a second-floor Sarnia boardroom filled to capacity with nearly 40 people.

Lichti, a volunteer with the national faith-based advocacy group Kairos Canada, slowly and deliberately begins to tell the tale of Canada’s residential schools. She describes the process of how aboriginal children were taken from the arms of their parents and sent to these far away institutions, institutions where physical and sexual abuse was rampant, institutions where First Nations children became isolated from their loved ones and were forced to sever all connections with their families, their communities and their spirituality.

As Lichti reads from the scroll another volunteer, Dana Hartman, dressed in a vintage 19th century British red coat, circles the room and begins ripping First Nations dolls from the arms of several attendees, who are playing the role of the fathers and mothers of these children. With their children taken, Lichti tells participants to turn their backs away from their children, a visual representation of the isolation that occurred between generations of aboriginal families after children were forcibly removed from their homes and were raised in a different place, in a different language and in an entirely different culture than their parents.

The startling, surreal scene was one of many episodes of First Nations, Inuit and Metis history played out during a two-hour long Blanket Exercise, held at First Sarnia Place on Saturday, Apr. 16. The Blanket Exercise is an interactive learning experience and workshop developed and put on by volunteers from Kairos Canada, the purpose of which is to provide a more accurate historical description of indigenous peoples’ experience in Canada and to shed light on why there is such a poor relationship today between indigenous and non-indigenous people, said Lichti, the exercise narrator.

“It’s really a chance to educate, to give the other side of Canadian history that we’ve not been told. And it’s also to sew seeds of reconciliation with the indigenous and aboriginal people in Canada,” she said.

Participants in the workshop are given roles as indigenous people and walk on a series of blankets, which represent land. As scrolls are read by both the narrator and participants, detailing indigenous history since the first European settlers came to Canada over 400 years ago, blankets are folded and removed, representing land taken by Europeans through broken treaties and arbitrary laws. Participants are also removed from blankets, representing both the hazardous health issues facing the country’s aboriginal population as well as the isolation they face. Following the completion of the exercise, participants get the chance to talk about their experience in a group discussion.

Covering topics such as residential schools, the BNA Act, the Indian Act as well as more recent topics such as violence against aboriginal women and the abysmal quality of health care and water on reserves, participants in Blanket Exercises are given the opportunity to act out and actually visualize the impact that these issues had on Canada’s indigenous population, importantly from their perspective, Lichti said.

“It’s well researched by the Truth and Reconciliation commission. They just released their report at the beginning of June, and inside they have 94 recommendations,” Lichti said. “One of the recommendations is that the education of the other side of Canadian history be mandatory, so that’s really what we’re trying to do…to educate.”

Most people, both aboriginal and non-aboriginal, who come to a Blanket Exercise for the first time really don’t have any inkling about the history of indigenous people in Canada, Lichti said.

“Some of the non-indigenous people are surprised, shocked, ashamed and angry. And the aboriginal people are…well, there is anger, but there’s more sadness,” she said. “I think now, in light of what’s going on in our country, there’s more hope. But certainly there’s a feeling of being unjustly treated, particularly with the residential schools which fragmented their families, took away their cultures and put their children into foster care with non-indigenous families. It was just devastating.”

For Gloria Thomson, a Londoner and a Metis who came all the way to Sarnia to attend her third Blanket Exercise, the sessions are a powerful, poignant way of learning about the centuries-long struggles of indigenous people in Canada.

“I came out to support this work. I think it’s just so important. It’s a beautiful way to tell a story, even though it’s not a pretty story – it’s a very emotional story,” she said. “Most people who have never done it before are shocked. Even though I’ve done it before, I reacted emotionally today when, as a Metis person, they took me off the blanket.”

It’s a story that hasn’t been told enough, said Thomson.

“I think we’ve learned nothing in our schooling,” she said. “I think now with the Truth and Reconciliation Committee and the truth-telling about the residential schools, it was a shock to most people, even though we knew that they existed. To hear about the things that happened there…it was just appalling. We will probably never really know the complete truth about those schools, but the fact that it went on for generations is unbelievable.”

“I think events like these help the dialogue…I think First Nations people need to re-develop that trust,” she continued. “But change won’t come from the government, change will come from events like this. When grassroots people get up in arms and say that we need to do something about this. And that’s really why I support it.”

The more that Canadians learn about indigenous history through activities like the Blanket Exercise, the more people want to help rebuild that relationship, Lichti said.

“I think with enough people who become educated and fired up, we can change the picture of Canada,” she said. “Because at the end of the day we’re all Canadian, aboriginal and non-aboriginal.”

For more information about the Blanket Exercise, visit www.kairoscanada.org or www.kairosblanketexercise.org