Skip to content
Posted inArticles
Posted by By Jennifer Dany Aube May 2, 2016No Comments 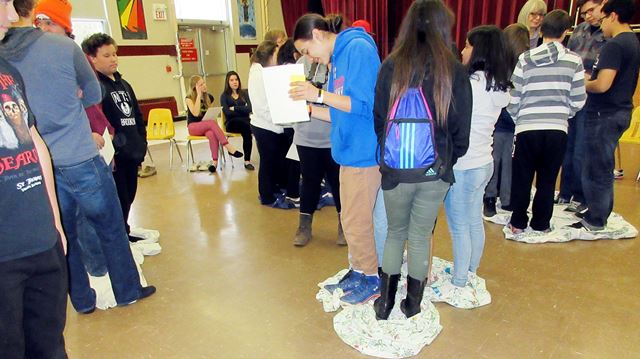 When blankets are no longer touching

On Tuesday afternoon, Pauline Johnson Collegiate staff and students participated in a KAIROS Blanket exercise to work toward understanding and reconciliation.
With the recent declaration of crisis and the media attention surrounding Attawapiskat, and the release of the Truth and Reconciliation Commission’s final report in late 2015, First Nations people are looking for Canada to do its part to meet the 94 “Calls to Action” outlined upon the closing of the commission.

“My hope is that (the final report) is not like the Royal Commission on Aboriginal Peoples (1991), a very expensive paperweight, “said Sherri Vansickle, a member of the Onondaga Nation. “What I hope is that people look at their part. If you are in the legal system, how can you, of all of the recommendations, make a difference somewhere? If you are in nursing or in the medical field, how can you make a difference? And we are doing our part in education.”

Vansickle is a faculty member and lecturer at Brock University with the Tecumseh Centre for Aboriginal Research and Education and a teacher of native studies and guidance counsellor for native students at Pauline Johnson Collegiate in Brantford.

On Tuesday, Pauline Johnson Collegiate hosted a KAIROS blanket exercise, an event aimed at bringing native and non-native peoples together to work toward understanding and reconciliation.

The two-hour long event saw more than 50 students and teachers participate and was facilitated by representatives from the community and from the KAIROS organization.

“Staff here at PJ decided that there are calls to action in the report that we can do here at school so we can do our part,” Vansickle said. “So we started a staff truth and reconciliation committee. The more awareness we can raise with our kids here and in the Brantford community I think the better off we will all be.”

The blanket exercise was introduced by KAIROS in response to the 1996 Report of the Royal Commission on Aboriginal Peoples which recommended education on Canadian-indigenous history as one of the key steps to reconciliation. The interactive workshop provides a visual to understanding 500 years of history of Canada’s native peoples.

The blankets involved in the exercise represent land in Canada, each as a province or territory. A narrator recounts the history of relations between the government, settlers, war and disease and the indigenous peoples of Canada.

The main part of the exercise requires the removal and folding of blankets making smaller areas of land with more space between as a result of legislation creating reservations, residential schools, government control of native people and other events that led to the extinction of several races of peoples.

“Now our blankets are no longer touching each other and there are fewer spaces to go on and to be able to walk on,” Vansickle said. “Having these blankets shows the literal land that has been taken from us.”

The students at the event, both native and non-native, responded well to the exercise.

“I specifically (did not) tell the students very much about the activity so they could experience it with authenticity,” Vansickle said. “What does it mean to them, what does it feel to them? To get in touch with their emotional selves but also their intellectual selves. So, this is what happened, this is how we got here. How can we make a difference, how can we move forward?

“Things like the blanket exercise (are) not going to make Attawapiskat better today. What (they are) going to do is raise awareness so we can start making a difference (in the) long term.”

KAIROS Mass education exercises on colonialism to hit capital cities across Canada: May 28 to June 6