Skip to content
Posted inArticles
Posted by By Jennifer Dany Aube May 3, 2017No Comments 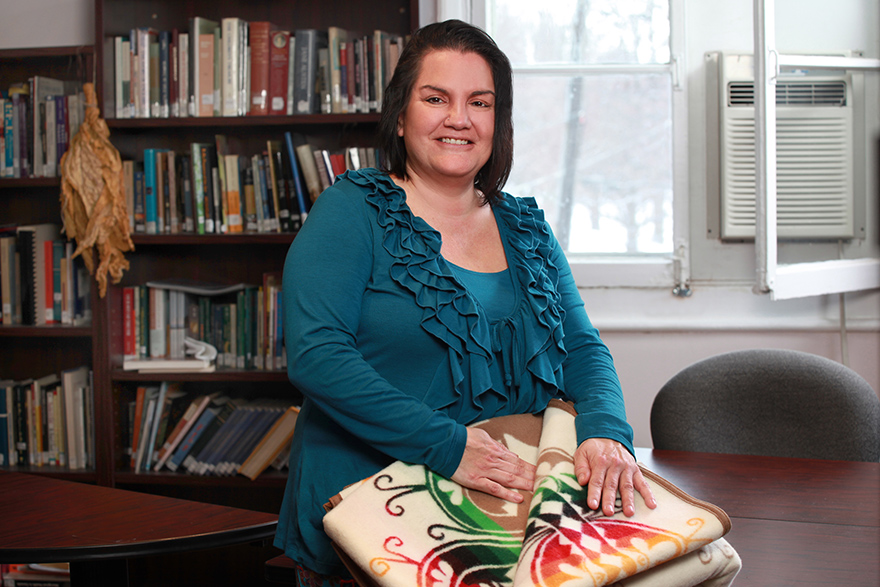 The floor of Wallace Hall is criss-crossed with colourful blankets. Participants move from blanket to blanket, greeting each other quietly, occasionally trading items – a cornhusk doll for a braid of sweet grass, a piece of leather for a dreamcatcher.

The blankets represent the northern part of Turtle Island, or North America, before the arrival of Europeans. The participants in this exercise are immersing themselves in the world, 500 years ago, of the Indigenous Peoples of Turtle Island, its original inhabitants.

Then, the participants experience their world changing. A facilitator folds up corners of the blankets, making the land “smaller” as the participants learn about the Indian Act of 1876 that, among other changes, created reserves that were a tiny fraction of the original territories. The people on the blankets explore the federal policy of enfranchisement that took away legal Indian status from First Nations people for a variety of reasons. These included pursuing university education, entering professions such as law or medicine, serving in the military, and, for women, marrying non-Indigenous men. Several individuals are taken away from their blankets, symbolizing the people alienated from their communities because of enfranchisement.

Over the next hour, the participants learn about the policies and actions affecting Indigenous Peoples. More individuals are asked to step away from their blankets. More blankets are folded; some are taken away entirely.

“You represent the Beothuk, the original inhabitants of what is now Newfoundland. Your people starved, died in violent encounters with settlers trying to take your lands, were hunted, or were taken captive for reward. Your people are now extinct. Please step off the blanket.”

At the end of the exercise, only three “survivors” are left, each one standing precariously on a tiny square of blanket. The remaining 40-odd participants are at the sidelines, having lost their lands, their identities, or their lives.

The blanket exercise was created, in 1997, by KAIROS, an ecumenical program administered by the United Church of Canada. Developed in response to the 1996 Report of the Royal Commission on Aboriginal People, this exercise has been repeated in schools, churches, community centres, and workplaces across Canada.

Our leaders need to show the way, but no matter how many deals and agreements they make, it is in our daily conversations and interactions that our success as a nation in forging a better place, will ultimately be measured. It is what we say to and about each other in public and in private that we need to look at changing.
Honourable Justice Murray Sinclair, Chair of the Truth and Reconciliation Commission of Canada

In the blanket exercise, each participant is given a scroll to read aloud at a certain point in the script. Each one gives community voice to a different viewpoint, historic or contemporary, Aboriginal or colonial. Justice Sinclair’s quotation comes near the end of the script, but his idea, about the importance of conversation to effect change – permeates the entire exercise, from the kinesthetic learning that takes place on the blankets to the quiet self-expression that is about to follow.

After a whirlwind tour of 500 years of Indigenous experience, the participants in the KAIROS Blanket Exercise re-group in a talking circle. It is a safe, confidential, and respectful space. The facilitator sets the tone by introducing herself to the group – and to creation – in this way:

Western-dominant society has conditioned most of us to introduce ourselves by stating our name and occupation, but in this environment, Laura Maracle wants to remove the power inequalities from people in the circle, to set the tone for a safe, honest conversation among equals.

“This introduction explains the name I was provided by community and put through ceremony,” says Ms. Maracle. “It describes my land base. If you know my land base, it is easy to figure out what my water base is. You also have an idea of the governance I follow; you know I walk in two worlds (Mohawk or Haudenosaunee and English).” In the talking circle, she says, “We all come from different backgrounds; we respect each other’s differences. Our differences are the strength that keeps us together.”

In the safe space of the talking circle, individuals take turns sharing what they have taken from the exercise. For some, there is astonishment and anger that they had been so ignorant of Indigenous history. For some, there are tears and feelings of helplessness. Some choose not to share: their silence is equally respected.

Laura Maracle, Ed’11 (ATEP) is the Aboriginal cultural safety coordinator at the Four Directions Aboriginal Student Centre at Queen’s. She has led the KAIROS blanket exercise at Queen’s for six years, taking hundreds of Queen’s faculty, staff, students, and administrators through the exercise.

“It’s not about inflicting guilt or shame on non-Aboriginal people,” she stresses.

The exercise allows participants to learn about each other’s backgrounds and experiences, to ask questions, to have difficult conversations, and to keep talking to each other, ultimately in order to effect positive change. And the blanket exercise is just the beginning. It is the first of three modules in cultural safety that Ms. Maracle offers through the Four Directions Aboriginal Student Centre. Module two explores terminology, legal definitions and self-identity, and the third module explores Indigenous paradigms and relationship-building. After completing the modules, participants are then divided into working groups to develop plans of action, moving forward, that they can apply in their current paths and professions.

In addition to her facilitation work, Ms. Maracle is working on her Master of Education in Aboriginal and World Indigenous Educational Studies at Queen’s. For her master’s research, she has been inspired by one of the most frequent comments she has heard after conducting the blanket exercise: “I wish I’d learned more about Aboriginal history earlier!” She plans to create a resource to be used in secondary school settings (by teachers, parents, and community leaders) that can be adapted by different communities across Canada to reflect their own Indigenous histories and stories.