Skip to content
Posted inArticles
Posted by By Jennifer Dany Aube May 11, 2017No Comments 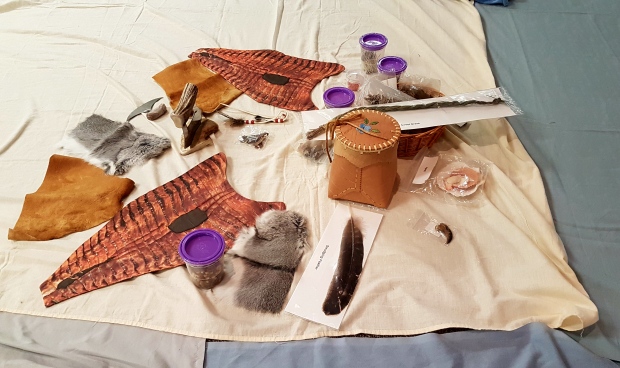 Peter Workman is determined to learn — even if it makes him feel uncomfortable.

“I’m part of a generation that didn’t receive a lot of training or a lot of education about Aboriginal history… I don’t believe residential school was ever mentioned in my public school or high school life,” he said.

So he decided to immerse himself into the “blanket exercise,” which, through role play, takes a condensed but critical look at the history of Indigenous and non-Indigenous relationships.

Workman, 44, has lived in Nunavut and the Northwest Territories for 15 years. He’s a member of the Yellowknife United Church congregation and is its board’s vice chair.

He says that since he’s moved to the North, he’s done a lot of research on Indigenous people, including following the work of the Truth and Reconciliation Commission.

But Workman says something was missing. He wanted to feel some sense of loss and pain that many Indigenous people had experienced throughout the history of Indigenous and non-Indigenous relations.

So, on a Sunday afternoon at the United Church, 20 other Yellowknife residents joined Workman in a large room for the blanket exercise, hoping to understand history of Indigenous peoples in Canada in a more tangible way.

Going into the exercise, Workman said he wanted to learn what happened and “maybe be more aware of how our actions have to change.”

He says many non-Indigenous people should “be willing to accept that change requires effort and sometimes you have to be uncomfortable to be understanding.”

Getting out of your comfort zone is something Hugh Moloney understands as well.

Moloney, 46, is from Nova Scotia but has lived in Yellowknife for nine years. He teaches classes at Aurora College.

He says that growing up, he heard many jokes that made fun of Indigenous people, but says when he got older he eventually realized nothing good came from them. He says the jokes were counterintuitive to building the healthy community he wanted to be part of.

“I think it’s a really important thing for all of us to try to engage in things we don’t necessarily know about and learn more about them, because that helps to break down differences and helps you come more closely linked to people and places that you are not part of,” Moloney said.

For nearly three hours, Moloney, Workman, and the others played the role of Indigenous people, listening intently to the stories and pivotal points in history through a narrator who also gave them directions.

Learning the assimilation of the Indigenous

The group was told about “pre-contact,” when millions of Indigenous people occupied the land and had their own ways of living and governing; to the first wave of European settlers who needed help from Indigenous people to survive in a foreign land.

In the blanket exercise in Yellowknife, everyone stood on blankets that symbolized North America — or Turtle Island, as many Indigenous people still refer to it — before the arrival of Europeans.

They collected items in the centre of blankets and traded them among themselves and eventually with the Europeans settlers played by actors.

But as more Europeans arrived, so did the problems faced by Indigenous peoples.

Diseases such as smallpox, which killed thousands of Indigenous people, forced some participants to leave the blanket, symbolizing their death. They were then told about the establishment of treaties, and how Indigenous lands shrank considerably (entire blankets were removed).

Others were forced off the blanket with the introduction of the residential school system and the subsequent 60s scoop, where thousands of Indigenous children were taken from their families, forced to assimilate, and often abused.

At one point in the exercise, a woman clutching a baby refused to move when an actor portraying a government official had to physically move her to an isolated blanket.

“There were very definitely points that I was uncomfortable with,” says Workman. “Having worked in Nunavut and having friends who are children who are survivors of residential school, children of families that were relocated to Grise Fiord and other places, where decisions were made and without any consultation or without any active participation.

“The concept of children going away to school and being taken away from parents — I can’t imagine.”

Workman says he got what he wanted from the exercise; it made him feel “real feelings” that Indigenous people might have felt; he realized the government was deliberate in their actions to try and “eliminate Aboriginal people.”

‘Treat others as we expect to be treated’

For Moloney, he says the blanket exercise made him think about what is behind his own personal opinions and values, which ultimately allows him to question them.

“What really stood out for me is that we’re all a part of this,” he said. “Reconciliation isn’t something that just happens. The government doesn’t create a reconciliation portfolio and then it’s done. It’s something that us as individuals and communities, and collectively our country have to be willing to do.”

After the exercise, everyone sat in a sharing circle for a debrief to personally reflect and share their thoughts about the issues.

Workman says it was vital to the process.

“Someone in today’s session mentioned the concept of why can’t we treat others as we expect to be treated. And I think that it’s a perspective that underwrites all of this. We wouldn’t want someone in our family treated this way; we shouldn’t do that to others.”

Originally published on May 11, 2017 by CBCNews North

An exercise in understanding: the KAIROS Blanket Exercise