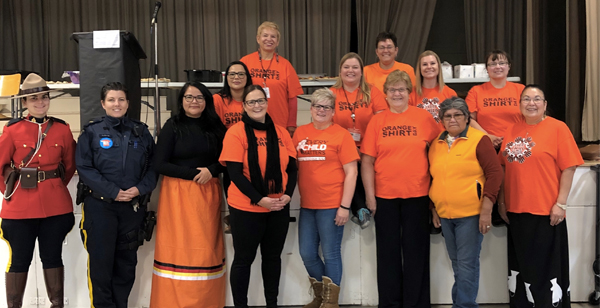 Denise Blomquist grew up on a farm and is married to Brian Blomquist, a member of Waterhen First Nation, but she didn’t realize how much she didn’t know about Canada’s relationship with Indigenous people until she participated in the Kairos blanket exercise.

“I just knew I had to do something. That just totally changed my life,” she said.

The participatory history lesson about the effects of colonization, had been offered to staff at Nipawin’s Cumberland College in 2010.

“It was my very first introduction to Indigenous history in Canada,” she said.

Discovering through the exercise how much Indigenous people lost and were controlled was shocking, but it was the teaching about residential schools that really hit home for her.

Blomquist’s mother-in-law, Darlene Fiddler, had attended the residential school in Beauval and Brian remembered his mother taking him as a child to see the old school, but she had never talked about her experiences there.

“I literally was in tears because I could feel my mother-in-law’s history. It was my first understanding of what she must have gone through.”

Blomquist began asking Fiddler, when the family was together, about her experiences and found she was willing to share with them.

“We’re all sort of learning together… That’s been pretty heartbreaking to hear her stories,” Blomquist said.

She joined Cumberland College’s inclusion committee to help ensure the Indigenous and growing number of newcomers feel safe and welcome at the College. She also sought out information about the treaties and attends Office of the Treaty Commissioner workshops with her daughter.

The 2015 release of the Truth and Reconciliation Commission’s 94 Calls to Action raised awareness and in 2018, some women from the town started a reconciliation committee to bring people together to acknowledge Indigenous people and their shared history.

“Nipawin kind of struggles with some racism, with lack of education on Indigenous history, just like me. I would say the majority of people in town didn’t get the proper education on it,” she said.

Yet, leaders in Nipawin and nearby Cumberland House stepped forward to support Reconciliation Nipawin by assigning employees to represent their organizations, such as school divisions, the Credit Union, RCMP, Social Services, the Health Authority and the mayors of Nipawin and Cumberland House. Blomquist represents the College and Indigenous knowledge keeper Sharon Mayer and Bradley Ironstar from the Oasis community services centre guide the group and connect them with Indigenous communities.

In 2018 the group held its first big event on Orange Shirt Day, with a traditional round dance that attracted about 300 people, including school groups.

They had another in 2019. Last year, because of the ban on gatherings, the College created a video featuring staff and students reflecting on reconciliation.

In 2019 people gathered in the Nipawin town square on June 21, National Indigenous Peoples Day, and raised a Reconciliation Nipawin flag, which flew until Canada Day.

Prior to the pandemic, the group had 35 people trained as blanket exercise facilitators and there was interest from the public, but that is temporarily shelved.

The group has created treaty and land acknowledgement signs that will be erected at the entrances to Nipawin and are planning for a future guided Indigenous history tour.

Reconciliation Nipawin is focused now on the region’s Indigenous history, drawing from the work of archeologist David Mayer, who conducted a dig at the current dam site, which revealed thousands of years of occupation and use of the area.

“Nipawin was really a gathering place. (That didn’t just start) with the formation of the town,” Blomquist said.

Statement From The Braided Warriors