Skip to content
Posted inArticles
Posted by By Connor Sarazin April 23, 2018No Comments 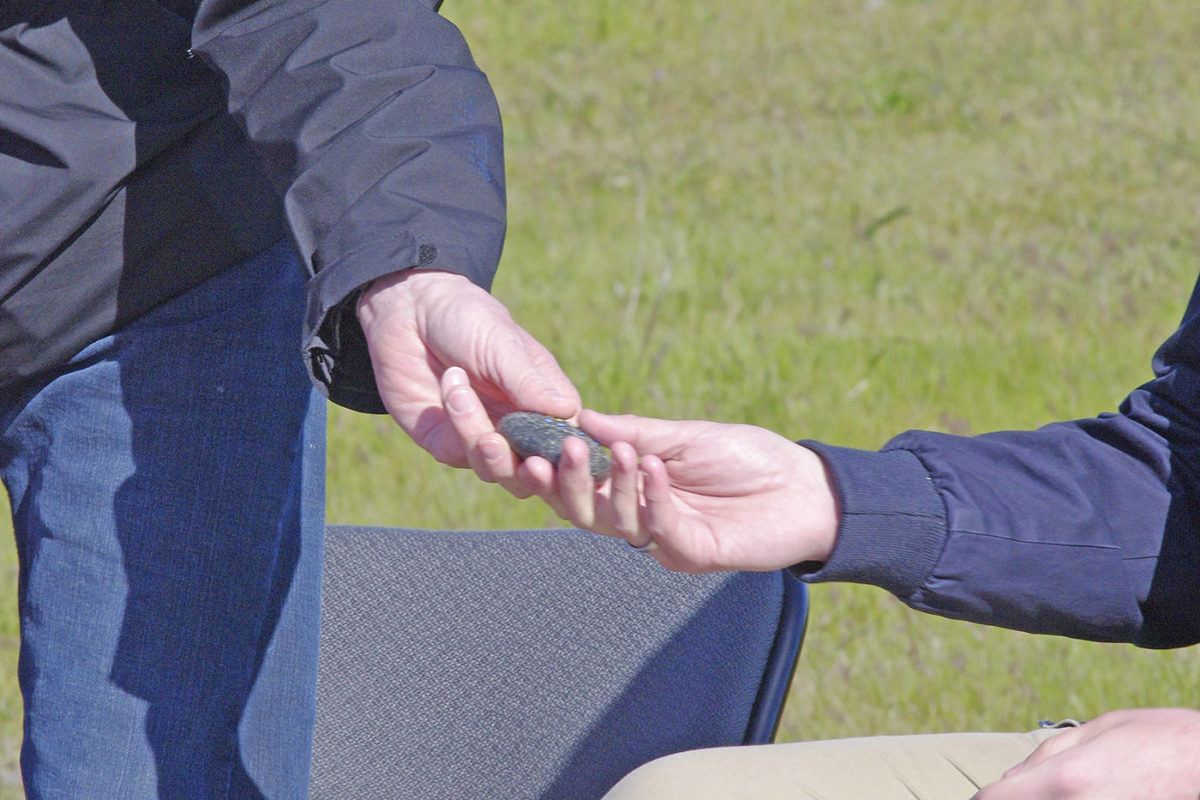 Watching blankets slowly disappear under the feet of Saanich Peninsula community leaders, who one-by-one leave a circle of people, one is struck by the symbolism.

The blankets represent the land occupied by Canada’s First People. And as those blankets are folded over and over, there is less room for people and at the end, only one person can remain in place — on very little material left to stand on.

On Monday, members of the Tsawout First Nation hosted a wide variety of people at a KAIROS blanket ceremony at TIXEN — otherwise known as Cordova Spit. Led by Lillian Underwood and Tina Savea, the event depicts the effect newcomers had on Canada’s Indigenous population. Toby Joseph, a Tsawout elected band councillor, opened with a prayer and said he was pleased to see many people there. He said the event is about sharing stories — from the Tsawout and from the rest of the community. In the crowd were politicians from Central Saanich and Sidney, local members of the RCMP, Canadian Coast Guard, representatives of the Capital Regional District and other business people.

Each were given cards and scripts, to hold up and to read out as Underwood and Savae narrated a brief history of the interaction between Europeans and Indigenous inhabitants of Turtle Island (North America). As they spoke of wars, disease, broken treaties and the taking of people’s rights, the blankets were made smaller, and people were sent out of the circle — representing the death and disenfranchisement of Canada’s Indigenous people and the erosion of their land.

They touched on issues such as residential schools and the ’60s Scoop, that saw aboriginal children taken from their families, leading to generations of suffering and loss of identity.

The idea behind the event, is to provide people with a different perspective of the impact of settlement and colonialism on people. Underwood noted that today, Canada’s Indigenous population occupies only around one per cent of the land — the rest, taken in treaties or simply just taken, as in the case of British Columbia where most First Nations land remains unceded via treaty.

The blanket ceremony, Underwood said, is part of reconciliation efforts between First Nations and other communities. It was created in the late 1990s by KAIROS (an ecumenical movement for ecological justice and human rights) in response to the 1996 report of the Royal Commission on Aboriginal Peoples. The ceremony covers 500 years of hitory in a short time and allows people to share their stories and perspectives, and to learn from each other. Underwood said she delivers similar events across the province and the country.

The event wasn’t all bleak, however.

There were some rays of hope for the future, as the blankets were unfolded a little, in recognition of the efforts of Indigenous youth in Canada to keep language and culture alive — and as the nation learns to reconcile with their neighbours.

After the blankets are packed away and everyone is back at their seats around the circle, Underwood said they each share what was going through their minds, and talk of their unique experiences with — and as — First Nations people.

Participants pass a speaking stone as they introduce themselves and why they are at the blanket ceremony. (Steven Heywood/News Staff)

Originally published on Apr. 23, 2018 by Steven Heywood in the Saanich News