Skip to content
Posted inArticles
Posted by By KAIROS Canada February 26, 2018No Comments 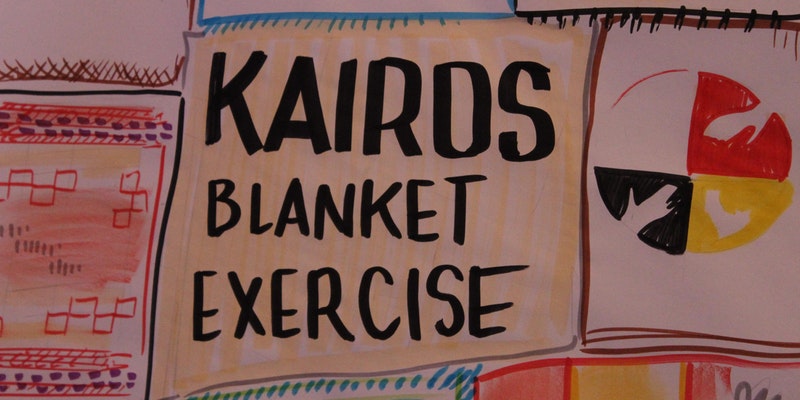 The KAIROS Blanket Exercise (KBE) is a tool developed in 1997 by KAIROS: Canadian Ecumenical Justice Initiatives in which participants learn about European colonization of Turtle Island (North America), the accompanying dispossession of Indigenous peoples (reflected by the steady removal of blankets upon which participants stand) and Indigenous resistance and efforts to reclaim land and rights. Faith-based and secular groups across Canada and the U.S. have used the exercise, sometimes adapting it to reflect specific geographies and communities. Here, two KAIROS and two MCC staff members reflect on lessons learned from the blanket exercise.

The KAIROS Blanket Exercise was created two decades ago in response to Canada’s Royal Commission on Aboriginal Peoples (RCAP), but is only recently being widely used. What changed to spur this interest?

Miriam Sainnawap (MCC): What sparked the change was the need to connect Canadians to the grim side of Canada’s history regarding its relationship with Indigenous peoples, which has recently emerged into public consciousness thanks to growing social movements and as a way of responding to the Truth and Reconciliation Commission’s (TRC) Calls to Action.

Ed Bianchi (KAIROS): The TRC Calls to Action were released during a time of heightened awareness of Indigenous peoples and rights, the result of decades of activism by Indigenous peoples and their allies, including churches. Public response to the RCAP report in 1997 was very similar to the response to the TRC’s Calls to Action. After only a year or two, the momentum generated by RCAP dissipated. Now, two years after the release of the TRC Calls to Action, and after 22 additional years of education and advocacy, momentum remains strong. What has changed is that ongoing efforts to educate have created a receptiveness to the challenges presented by the TRC.

Sara Anderson (KAIROS): The TRC brought the challenges of reconciliation to the forefront of the Canadian public consciousness. This movement towards learning and unlearning the truth of the history of this land has been augmented by the resurgence and amplification of Indigenous voices and views through movements such as Idle No More.

Erica Littlewolf (MCC): I think the interest has increased because of the TRC process. People were curious about boarding schools and began asking questions. The questions led to wanting to learn the underlying issues of how boarding schools came to be. Because of the interest in Canada, the exercise was translated into a U.S. context and now has gained traction in ecumenical circles.

What roles have Indigenous and settler peoples played in developing and implementing the blanket exercise? How does this compare to the historical roles of these peoples?

Sainnawap: For Indigenous peoples, the challenge is finding a space to participate in the spirit of the promises, rights and ways of life gifted to us. Settlers need to stop taking up space for us and need to start listening. The exercise does play a role in retelling the stories of our remembered past, reaffirming the dignity and agency of Indigenous peoples and recognizing the active role of Indigenous peoples in reclaiming and restoring our communities and cultures and resisting ongoing injustices. While it is important for people to know our history, there is an underlying power dynamic around the issue of who owns the story and who gets to tell the story on behalf of Indigenous peoples.

What role does education play in overcoming the Doctrine of Discovery? Is the role of education different for Indigenous and settler peoples?

Sainnawap: Canadians resist confronting Canada’s racist history and policies. That past still lives in the present day. In my opinion, the blanket exercise is not able to challenge the Doctrine of Discovery in practicality. It allows one to remain a passive learner, not an active doer dismantling the oppressive systems and confronting the racist attitudes held deeply in the national psyche.

Bianchi: RCAP said we cannot successfully address the current challenges in the relationship between Indigenous and non-Indigenous peoples in Canada without knowing how those challenges arose. This includes the Doctrine of Discovery and how it continues to impact the beliefs, attitudes and behaviors reflected in our governments, legal structures, education systems, churches and society in general. Education addresses the ignorance at the root of the discrimination and racism that influences so much of what happens in our society and in the relationship between Indigenous and non-Indigenous peoples.

Anderson: I heard an Elder say there is a reason truth comes before reconciliation. If settlers are not aware of how the practices, policies and normative framework of the Doctrine of Discovery are still being implemented or how they themselves directly benefit from this Doctrine, then overturning this structure will be very difficult.

Littlewolf: Through education we begin to see the roots of the Doctrine of Discovery and how embedded in structures it has become. As an Indigenous person, education opened my eyes to a systemic world that I was taking on as my personal shortcomings. Through learning, I was able to separate what was mine to deal with from things that are out of my control and where I can advocate. Within MCC, we have developed a Doctrine of Discovery Toolkit for use by MCC workers in facilitating different types of workshops and learning events for both settler and Indigenous communities about the DoD and its destructive legacies. The educational task is a vital first step towards action to overcome the Doctrine of Discovery.

What impact does the blanket exercise have on participants? What do we know about how their attitudes or behaviors have changed as a result of participating in the exercise?

Sainnawap: Often participants experience strong emotional reactions such as guilt and shame. This is the beginning of the journey for them to question and analyze within, coming to understand the role of the privileged and confronting their prejudices. It is a choice how they want to change.

Bianchi: A Montreal police officer said the KBE helped him do his job better by helping him understand why so many Indigenous people are homeless and on the streets. After the KBE, he encountered an Indigenous person on the street and knew enough to ask, “Where are you from?” rather than “What’s wrong with you?” The heightened awareness that came from the KBE helped him take a more positive approach and reduced the risk level of the situation. Indigenous peoples undergo a similar transformation, especially those not aware of the history taught through the KBE. Following a KBE involving mostly young Indigenous men, one participant said, “This exercise helped me understand that it’s all about the land. It’s not about me.”

Anderson: The talking circle which follows every blanket exercise is the most powerful part of the whole experience. Some express anger that they didn’t learn about this before, or sadness at the injustice, while others feel guilt or a sense of shame. We always encourage people to move past those feelings of guilt and shame, because they are not productive, and often will not lead to concrete actions.

Littlewolf: A lot of settlers feel sad and guilty and are quick to want change, whereas Indigenous people have been sitting with it for lifetimes and look toward holistic healing. I have hope that people will change as a result, but I remove myself from controlling this aspect as much as I can. As an Indigenous person, my job is to bring the perspective in a good way and allow for the spirit to move as it will. I feel good knowing that people can no longer claim ignorance and leave it all as a mystery.

Looking back over the 20-year history of this exercise, what key lessons have been learned?  What challenges lie ahead?

Bianchi: Each time the blanket exercise is delivered, we are reminded of the importance of education and dialogue. RCAP called for a new relationship. The TRC called for reconciliation. Both identified education as key, and both saw education as an active, ongoing, experiential, participatory process that involves building cross-cultural connections. Justice Senator Murray Sinclair said that “it is in our daily conversations and interactions that our success as a nation in forging a better place will ultimately be measured.” The KBE helps initiate and inform these conversations. The challenge will be in maintaining the momentum while protecting the integrity of the exercise and ensuring the safety of the participants. Over the past two decades, we have learned that the KBE has the power to transform, as well as the power to traumatize. We have learned that with this power comes a responsibility to ensure that the KBE continues to contribute to reconciliation through education, and in a way that does no harm.

Anderson: One of the main challenges that I see ahead is responding to the question of “What can I do next?” in a more intentional way. This might mean developing another activity to follow the KAIROS Blanket Exercise, or it might be an invitation to direct action and a call for further learning.

Littlewolf: One of the key lessons that I have learned is the way in which Indigenous people are all different but in order to get across the systemic nature of the issues we have to lump them in as one group. I think the interesting part is to take it back apart and to realize that each policy affected people differently. That in fact there are similarities and at the same time there are differences. Holding both of these at the same time is often difficult.

I think the biggest challenge is keeping the momentum going. Where do we go next? Can we go there? And with whom do we go?