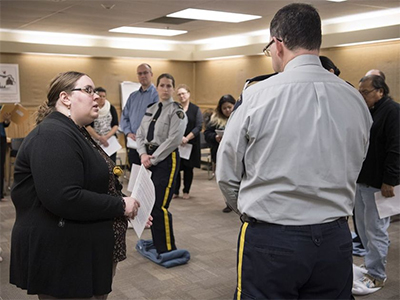 Originally published on December 4, 2017, by the Regina Leader Post.

Troop 10 will be the first, starting Tuesday afternoon, after a group of about 25 RCMP officers and staff spent Monday learning how to lead the “blanket exercise,” which compacts 500 years of history into a one-hour session.

The hope is that cadets will gain “a sensitivity to what has transpired in the past,” said RCMP curriculum designer Nathalie Fehr, “and that they understand that they have a responsibility to work with all communities to problem-solve and … help people.”

Standing on blankets that represented the northern part of Turtle Island — now known as Canada — the participants read from scripts, telling the story of Canada’s Indigenous history from pre-colonization to the present.

Putting a long and often traumatic history into words, the goal is that future RCMP officers will be able to better relate to community members.

Tara McMillan started her career with the RCMP 16 years ago, as a dispatcher in the Northwest Territories.

In that work, she often heard the negative aspects of Indigenous people’s lives —alcoholism, drug abuse and violence.

“If that’s all you’re hearing, then you become hardened to them and to what they say and to their experiences,” said McMillan, who now works in cadet services at Depot.

“I think that this will help (RCMP officers) to maybe get a different perspective as to where these people have come from, how their land’s been taken away, how they’ve gone through the residential schools,” added McMillan.

“All of that history I think will allow them to be more empathetic as they go out into the workforce and work with the people on a daily basis.”

Two years ago, RCMP then-commissioner Bob Paulson admitted “there are racists in my force.”

There have been cases across the country of RCMP members racially profiling citizens.

A lawyer representing Colten Boushie’s family alleges the RCMP was racist in dealing with the family after his shooting death.

“Unfortunately we do hear stories and I’d say it’s not just from police forces, it’s from all sectors of society,” said Anderson. “Everyone can have very negative and racist stereotypes against Indigenous peoples and against other minorities.”

Having worked with RCMP members in the past, Anderson has heard that the blanket exercise has changed the way members work with Indigenous people.

“When they next encountered an Indigenous person while they were in uniform, their assessment of the threat level was definitely changed,” she said.

The blanket exercise will be tied to the cadets’ module on missing persons investigations.

Throughout the blanket exercise, which was held in the Aboriginal Cadet Heritage Room, participants heard that, prior to colonization, First Nations people fished, hunted and farmed. They each had a language and laws, and made treaties to resolve conflicts.

Participants read first-person perspectives, as well as a series of facts, such as:

The last member of the Beothuk, the original First Nations inhabitants of Newfoundland, died in St. John’s in 1829.

The 1783 creation of the U.S./Canada border divided existing communities.

The 1876 Indian Act banned traditional ceremonies like smudging and potlatch.

Inuit people today are 186 times more likely to get tuberculosis than most other Canadians.

Canada voted against the United Nations’ Declaration of Rights of Indigenous Peoples, which was enacted in 2007. It only approved the declaration in 2016.

The RCMP has been part of the problem. One Inuit man told how the RCMP shot his sled dogs, which prevented him from hunting.

The RCMP “often” helped remove children from their homes to attend residential schools, where thousands of children died and many experienced physical and sexual abuse.

Throughout the workshop, as the story of colonization went on, the blankets got smaller and smaller, to the point that the participants ended up on squares no bigger than their feet.

This represents reserve lands, which comprise less than 0.5 per cent of Canada; 70 per cent of land that was set aside in more than 300 treaties has been lost or taken away.

KAIROS Canada developed the blanket exercise in 1997, a response to the federal government’s 1996 Royal Commission on Aboriginal Peoples.