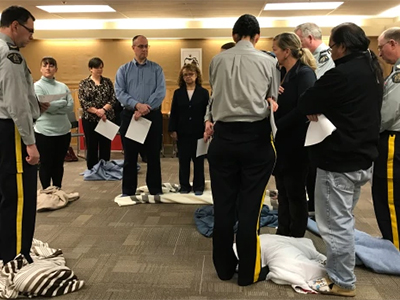 Training educates cadets on history and experience of Indigenous people

Photo: RCMP Academy instructors take part in a blanket exercise in Regina this morning. These instructors will reproduce the exercise for new RCMP cadets as part of cadet training, as of Dec. 5 onwards. (CBC)

One by one, blankets are removed from Turtle Island and people are sent off their common land to the fringes, lost to smallpox and other diseases or removed from their families and homes.

In the course of one morning, about 20 RCMP instructors walked through more than 500 years of Indigenous history, as they took part in a blanket exercise that will become part and parcel of all new RCMP cadets’ training from Dec. 5 onwards.

For Tara McMillan, who works in administrative services at the RCMP academy in Regina, the morning was “an eye-opening” experience.

“I realize that I have been very ignorant about our history and what has happened to the Indigenous people here in Canada,” she said.

Seeing beyond the negative

As someone who has worked with the RCMP for 16 years, she said negativity can become a dominant focus in a policing setting.

“You hear a lot of the negative parts of the Indigenous world and what they’re going through, a lot of the alcoholism, and the drug abuse and the violence,” McMillan said.

“If that’s all you’re hearing, then you become hardened to them, and what they say and to their experiences.”

But the blanket exercise can give cadets a new perspective on the Indigenous experience and history, from the loss of their land to more recent trauma such as residential schools, and the disappearances and murder of Indigenous women and girls, she said.

Sara Anderson, a KAIROS Canada Blanket Exercise Regional Co-ordinator, said the organization has worked with RCMP divisions and headquarters in the past, delivering blanket exercises.

However, the advisors who develop RCMP training units expressed an interest in making the exercise part of cadet training, which began the partnership that is now taking its first steps forward.

Once RCMP instructors are trained in the process, they will walk cadets through the experience themselves, as part of the module on missing persons. An elder will also be present, to provide support and guidance.

“For me it’s part of my own healing journey, because I never grew up learning much about this,” Anderson said.

She said her father was Indigenous and became part of the foster care system at a young age.

When she went through her first blanket exercise, she said it gave her insights into her family history and helped explain parts of her upbringing she had never understood before.

“So through doing the exercise like this, I’m able to share my story, and help other people become aware of these events and how they’re not just history, but they have current impacts as well on people just like me.”

Often, people can have a fear of what they don’t know, said Amy Rankin, manager of the academy’s learning resource centre. The blanket exercise should make cadets “much more empathetic and much more understanding,” she said.

For her, being part of the exercise was not like reading a book or watching a documentary, but an immersive experience that “really drove everything home,” and made the Indigenous experience much more personal to her.

“It was reality. It’s not just history, it’s where we are right now.”

The RCMP Academy says modifying the RCMP Cadet Training Program to include the KAIROS Blanket Exercise is happening in the spirit of reconciliation, adding it believes the addition to its curriculum will “engage cadets in the history of our peoples and will have a durable impact on their work in the field.