Skip to content
Posted inArticles
Posted by By Connor Sarazin September 8, 2017No Comments 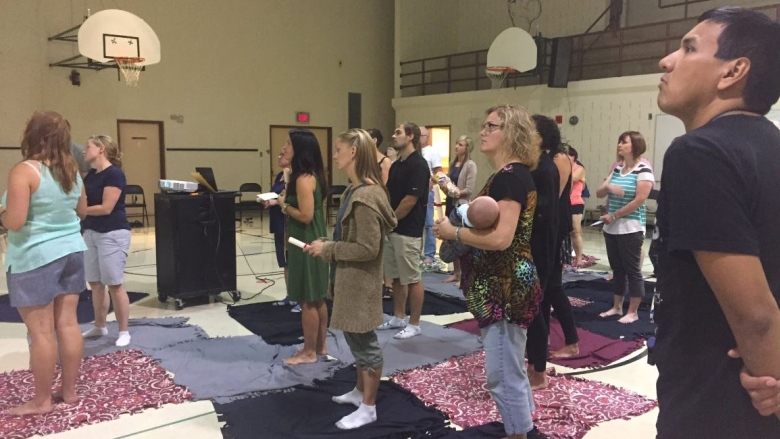 When it comes to Indigenous education in the classroom, Regina Public Schools isn’t waiting for teachers to learn it on their own.

The school division has started using a educational tool called “the blanket exercise.”

The interactive learning activity is a crash course in Indigenous history that covers events dating back before Christopher Columbus in 1492.

“For many [non-Indigenous teachers] … it is learning hundreds of [years] of history in a short window,” said Peter Turner, Indigenous advocate for Seven Stones Community School.

“It educates them on the context and the historical specifics which have been denied to them … through their own education in the same the system [Indigenous people] go through,” he said.

According to Turner, the exercise provides participants who don’t have a strong understanding of issues like residential schools or missing and murdered Indigenous women to experience that trauma in a safe place.

The blanket exercise was developed by the faith-based human rights group KAIROS Canada as a direct response to the 1996 Royal Commission on Aboriginal Peoples report.

According to the KAIROS website, the intent is to build a better relationship between Indigenous and non-Indigenous peoples.

The blankets are then folded again and again to symbolize the loss of territory, with participants falling one by one — deprived of food, killed in conflicts or smallpox epidemics, or moved from one reserve to another or to residential schools.

‘It’s important for everybody’

The Aboriginal education department of Regina Public Schools wanted to focus on educating all staff in the division and decided using the blanket exercise was an effective way to start.

“From that we went into everybody in [the division office] … IT people, delivery truck drivers, carpenters, our facilities people, people in accounting and finance,” she said.

Longman said that the goal is to have all staff from the division’s 58 schools participate.

Second-year Albert Community School teacher Dalton Burzminski participated in a blanket exercise with his students and said he was impressed to see the kids engaged in learning about such heavy topics.

For Longman, successful Indigenous education in Regina Public Schools relies on elders, and that’s why one of the division’s 12 elders-in-residence is present at each blanket exercise.

When it came to rolling out the exercise, “We consulted with them — is this too much? Is this accurate? All of those pieces and got their stamp of approval,” she said.

Longman said she wants everyone in the school division to play an active role in building a better relationship between Indigenous and non-Indigenous peoples in Canada.

“[The blanket exercise] is not just for teachers, it’s important for everybody.”

How a blanket exercise can be used to teach Indigenous issues

‘There’s a reason that truth comes before reconciliation’