Skip to content
Posted inArticles
Posted by By Jennifer Dany Aube May 15, 2016No Comments 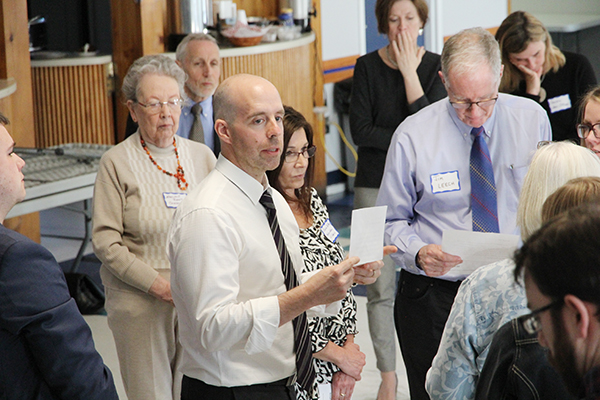 Photo: Incoming Provost Benoit-Antoine Bacon reads one of the historic moments of Aboriginal history during the KAIROS Blanket Exercise held during the Aboriginal Council of Queen’s University meeting.

Members of the Aboriginal Council of Queen’s University took part in a Kairos blanket exercise during their most recent meeting, held at the Mohawk Community Centre in Tyendinaga on Monday, May 9.

Facilitated by Laura Maracle, Aboriginal Student Success Strategist, and Vanessa McCourt, Aboriginal Advisor, of Four Directions Aboriginal Student Centre, the exercise  is an interactive learning experience aimed at teaching Indigenous rights history. Developed in response to the 1996 Report of the Royal Commission on Aboriginal Peoples, the blanket exercise covers over 500 years of history in a one-hour participatory workshop. Participants take on the roles of Indigenous peoples in Canada and while standing on blankets that represent the land, they interact and learn about pre-contact, treaty-making, colonization and resistance.