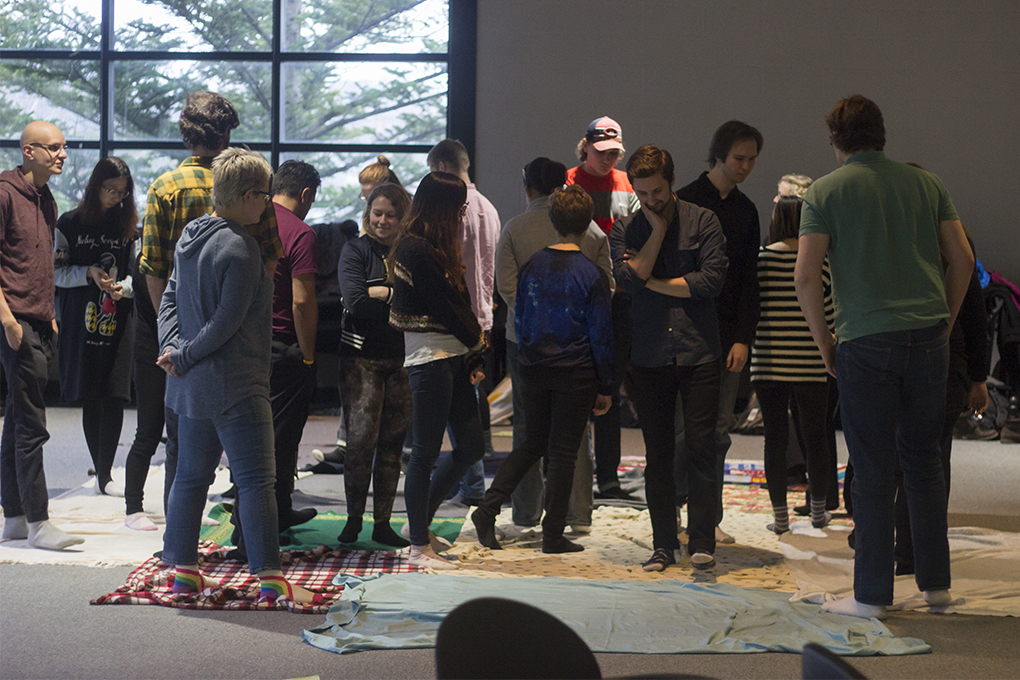 Last March, the University of Guelph announced it would be hiring five new Aboriginal professors and increase financial support for Indigenous scholars and graduate students.

“This initiative will help the University transform its learning environment and further enhance our existing student support,” said Charlotte Yates, provost and vice-president of academics, last spring in a press release.

Dr. Sheri Longboat, the newest faculty member of the School of Environmental Design and Rural Development, is among the five new tenured professors at the University of Guelph. Longboat’s interest of study is within rural development and particularly in water resources and securities of First Nation communities.

As part of her new graduate class, Contemporary Aboriginal Issues, she reached out to KAIROS Canada to run their blanket exercise to provide an intimate and experiential overview of Indigenous history of Canada. A master’s level landscape architecture course and Longboat’s advanced planning course also joined the exercise.

“I think it’s understanding an accurate history—one that presents the Indigenous perspective and not just the colonial history,” Longboat told The Ontarion.

“I’d even go so far to say an Indigenous perspective of history is essential to reconciliation in moving forward with more positive relationships because when you speak to people we’re talking about going back to those original relationships.”

Longboat’s intention was to provide her students the knowledge and understanding of the causal repercussions of hundreds of years of assimilation policy, in order to provide a touchstone to help mend those relationships through reconciliation as students move into the future.

“When I go to the elders and ask: How do we collaborate? How do we work together? How do we fix these water issues with the government? It’s no secret—we go back to the original treaties,” said Longboat. “We go back to those original relationships—and how do we get back there? That’s with mutual trust, friendship, and truly recognizing co-existence and going back to that mutual respect.”

The KAIROS organization is a group of united Canadian churches and religious organizations advocating for social change. Their website lists ecological justice, Indigenous rights, migrant justice, and gender justice as their main areas of social action.

The KAIROS Blanket exercise was developed as a response to the 1996 Report of the Royal Commission on Aboriginal Peoples, which highlighted the injustices committed against First Nations people. The report also recommended that education on Canadian Indigenous history is a vital step to reconciliation.

The blanket exercise provides an overview of over 500 years of history in a 90-minute experiential workshop in which participants step into the role of Indigenous peoples.

The facilitator of the exercise and University of Guelph alumna, Allison Dyjach, got involved in facilitating the KAIROS Blanket exercise after participating in the exercise on parliament during the closing ceremonies of the Truth and Reconciliation committee.

The exercise uses traditional First Nations elements to provide an Indigenous space for both Indigenous and non-Indigenous students to enter. The exercise both begins and concludes with a talking circle, wherein a talking stone or stick is passed around.

This particular exercise’s initial talking circle asked everyone to share their heritage and hopes for the exercise. The latter circle focused on the personal thoughts and effects. Many students were emotional in the latter talking circle; some passed the stone, unable to put their emotions into words.

The exercise begins 500 years before contact with any Europeans on “Turtle Island,” the name for North America long before the Italian explorer Amerigo Vespucci sailed across the Atlantic. It is at this time that the students walked freely across the 11 blankets that represented Canada.

Events and narration then persisted throughout the exercise. Contrasting quotes showed the differing opinions on trusting First Nations peoples with the colonizing sentiments of the Europeans. Blankets were folded, and blankets and students were removed after key historical events.

“As a student, it is easy to read a paper, read a chapter, close the chapter, finish the paper, put that away, and then explore something new,” said Valencia Gaspard, a PhD student in the environmental and rural design program. “But when you go through with the motions physically it’s quite different.”

Smallpox, treaties, residential schools, the Sixties Scoop, sexist portions of the Indian Act, and missing and murdered Indigenous women were all instances when students were asked to step off the blankets and when blankets were folded.

“Many of these students will get their professional certification in planning and will be working for municipalities and will be working for NGOs or consulting firms facilitating that relationship with First Nations communities—well, all Indigenous people,” said Longboat. “If they have this background, their approach to this relationship will be very different than it would’ve been if they had not had that.”

Longboat plans to provide more experiential learning and field work. She has organized field trips to the Woodland Cultural Centre and to the residential school in Brantford, nicknamed the “mush hole” due to the poor quality of food served to the students. Although she recognizes a history of injustice, Longboat is thankful and hopeful to have the opportunity to share this co-history with future planners and designers.

“I try to be positive and not cynical about things because that’s the reality of it too,” she said, “but I think we are in changing times, but not to say this hasn’t stopped, it’s happening now. Communities are not being consulted, resource development continues in their backyards, their lands become polluted, funding continues to not be increased, all of these challenges are still happening. That’s saddening, but if we were ever at a point, at least in the last 20 years I’ve been doing this, we’re at the most hopeful point within that spectrum with some of these changes that are happening.”

The KAIROS Blanket exercise creates a foundation for fundamental change in people’s understanding of Canadian history.

Originally published in The Ontarion on February 1, 2017.