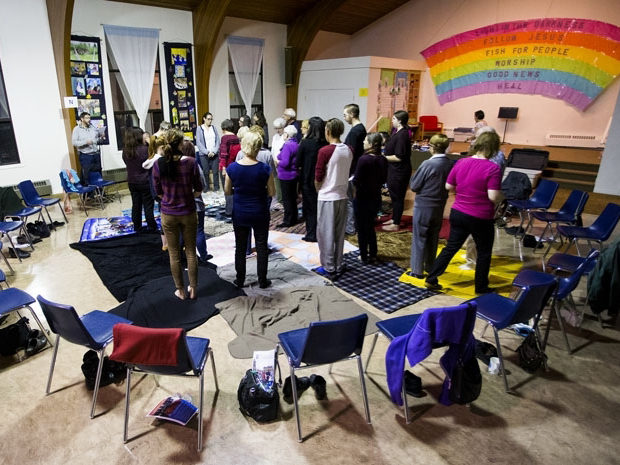 “Those with blue cards, please step off the blankets.”

And with those words, I was asked to take a seat.

“You represent those who died of malnutrition after being forced off your traditional territories and away from your hunting grounds,” explained narrator Rev. Mervin Gallant.

For the next 20 minutes, I watched as facilitators pulled back and removed the blankets – representing the lands inhabited by indigenous people – that once covered the floor of the St. Albert United Church, as Gallant led the group through a historical timeline of Canada’s formation.

Developed by KAIROS Canada, a group of 11 churches and religious organizations that advocate for ecological and social justice, a blanket exercise is an interactive learning experience that teaches indigenous rights history.

Originally developed in response to the 1996 Report of the Royal Commission on Aboriginal Peoples, which recommended education on Canadian-indigenous history as a key step to reconciliation, the exercise has taken on a renewed popularity since the release of the Truth and Reconciliation Commission’s final report last summer.

Morin, who has put on several of these exercises in the region over the last six months, said blanket exercises are an important reconciliation tool because they tell an often-untold history.

Even cities like St. Albert, which make great efforts to honour the past often shove their involvement in residential schools and other events that impacted indigenous people under the rug, she said.

Not only do blanket exercises tell an untold history, but the interactive model helps tell that story in a way that can help create deeper understanding and empathy in non-aboriginal people.

“It really illustrated the point of what happened, how little they ended up with,” said St. Albert resident Alice Hinds following the exercise.

Although she grew up near a Saskatchewan reserve and was aware of some of the hardships faced by the community, she said the blanket exercise helped her better understand the historical circumstances that led to these hardships.

“It was interesting to find out how it all happened,” said Hinds. “It hasn’t been taught in any of the books, so you only find out through these (exercises) how it progressed and got to the way it is.”

Wednesday’s blanket exercise also acted as a fundraiser for the Healing Garden, meant to commemorate the children forced to attend the two St. Albert residential schools.

“The Healing Garden is part of that reconcili-Action, and there’s been some issues with the funding so we want to support it as much as we can,” said Morin.

Originally published by Bryan Young in the St. Albert Gazette