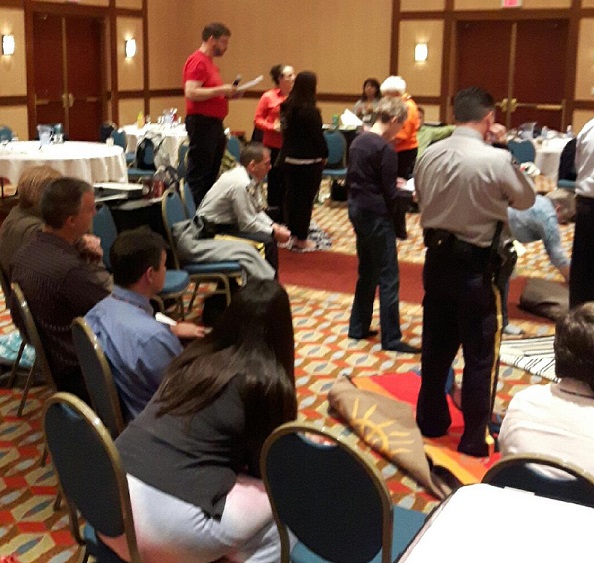 Marilyn McSporran couldn’t forget the moment years ago when one of her husband’s colleagues in the RCMP made an ugly remark about Indigenous peoples. When an Elder in Saddle Lake, Alberta gently encouraged her to introduce the KAIROS Blanket Exercise to the RCMP, McSporran decided to pick up the phone.

She never anticipated that one call to Inspector Honey Dwyer would swiftly lead to the Blanket Exercise becoming part of the RCMP’s Alberta Division’s mandatory Indigenous cultural training for all officers and employees in the province.

The KAIROS Blanket Exercise is a participatory telling of Canada’s history from the point of view of Indigenous peoples. 2017 marks 20 years since its creation.

Inspector Dwyer, the Officer in Charge of Aboriginal Policing for K Division (Alberta), saw it as a good fit. Her office already offered a cultural course and two-day culture camp, which are informed by local Elders and focus on local Indigenous communities. The RCMP also offers an Aboriginal Awareness Course and four day Aboriginal Perceptions Course to all officers and employees in Canada. Based on consultations with Elders and other experts, it covers residential schools, the 60s Scoop and treaties, among other things.

The KAIROS Blanket Exercise is helping the RCMP’s Alberta Division take this learning to a new and often personal level.

Inspector Dwyer invited McSporran to lead it in September at the RCMP’s annual training in Edmonton with 54 officers.

“The majority of members found the Blanket Exercise extremely powerful,” said Inspector Dywer. “They learned more, including the things they hadn’t picked up on in the classroom setting, even though a lot of the information is covered in our material. It sank in because it was interactive.”

This response stood out for McSporran too.

“During the circle that follows the Blanket Exercise, participants kept saying ‘we’ve all been told this and we read about it but never has it been so powerfully presented that now we really get it,'” she said.

The Blanket Exercise was particularly powerful for Indigenous RCMP members, including Inspector Dwyer, who belongs to the Lac La Ronge Indian Band in Saskatchewan.

“We have officers who are Aboriginal and Métis who experienced a lot of the things in the Blanket Exercise. They went to residential school or were part of the 60s scoop,” said Inspector Dwyer. “The sharing at the end was impactful because you heard their side of it and what they got out of it. The Blanket Exercise brought up something from their past and this helps with their healing.”

For settler Canadians, the experience hit home too.

“The senior RCMP officers wished they had received this earlier on in their service,” said Inspector Dwyer. “The Blanket Exercise gives them a better understanding of why things are the way they are today and why there is a long way to go towards healing.”

Inspector Dwyer plans to include the KAIROS Blanket Exercise as one of four cultural training options for RCMP officers and employees. While members have a choice about what training to take, the Blanket Exercise is shaping up to be a popular one. “A lot of people are excited about us doing this,” she said.

Inspector Dwyer and her team are in the process of determining how many employees are receiving cultural training, including the KAIROS Blanket Exercise.

“We’re making sure that all employees are trained because the Truth and Reconciliation Commission (TRC) specified all public servants,” she said, referring to the TRC Call to Action 57, which calls for public servants to learn about the history of Canada’s Aboriginal peoples.

For McSporran, who is with the St. Albert United Church, the RCMP’s response to the Blanket Exercise is “a dream come true.”

“The Blanket Exercise is a perfect learning opportunity for the RCMP,” she said. “Hopefully we can reach as many RCMP members across Canada as possible.”

Inspector Dwyer agrees. Her message to her colleagues across the country is:

“In order to have compassion, you have to have understanding. I think the KAIROS Blanket Exercise opens up people’s eyes. Every time I do a training session myself, I find I learn a little bit more. Every Elder is going to teach you something different.”

Originally published on rabble.ca by Cheryl McNamara on January 3, 2017