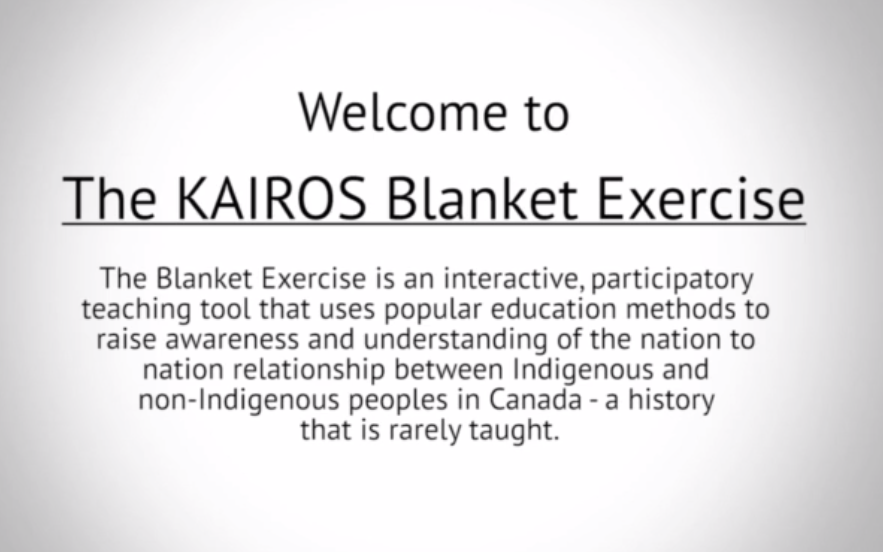 Originally published on 1JustCity on November 18, 2015.

One of the services we provide out of North End Stella Community Ministry is the KAIROS Blanket Exercise.

Recently we did it with the partners that support our Ministry drop ins, business students and the Winnipeg Ministers of the United Church of Canada. Here is what Rev. Jeff Cook, Minister at Transcona Memorial United Church had to say about it. Many thanks to Jeff for letting us share it!

On Tuesday evening we participated in the Blanket Exercise.

The edges of the blankets overlapped. The blankets represented Canada. During the exercise, the blankets were referred to as Turtle Island – an aboriginal name for North America.

About 35 of us participated. We were invited to stand somewhere on the blankets. Once on the blankets, we represented the indigenous people who lived here before Europeans arrived.

The Blanket Exercise would lead us through the history of colonizers arriving, treaties being signed and the impact on Indigenous people.

One of the facilitators began to move amongst us, folding back the edges of some of the blankets. This created gaps between the blankets and the people standing on the various blankets. It also created less standing space for people on the blankets

As the exercise proceeded, people were told to leave the blankets.  Some of them represented people who had died from infectious diseases brought to North America by Europeans – diseases and infections for which indigenous people’s immune system had no developed defences. Some were removed to go to Residential Schools. People were removed and blankets were removed. Blankets were folded as treaties were signed.

By the end, there were about a dozen people left standing, bare floor separating us from each other as we stood on tiny ‘remnants’ of the blankets.

In retrospect, I realize that part of my frustration was our complicity throughout the exercise. There was a script. There was a process that was ‘set’ and should be followed.  Had we refused to follow the script, refused to step off our blankets, we would not have experienced the historical story that was being told. By refusing to deviate from the script, we were becoming colonized, coming to accept that:

‘This is the way it is. This is the way things are done. When you discover land you want, you figure out how to make it your own. When you encounter people who don’t look like you, dress like you, act in what you consider to be socially acceptable ways, you ‘educate’ them to behave like you behave.  If our nation, our people, ‘us’ represent the best, the brightest, the most ‘advanced’ cultured then…well, there should be some perks for being the best, brightest and most cultured. Once we see ourselves that way, we see everyone else as less best, less bright, less cultured. ‘They’ need ‘us’ to help them live.’

Slowly, subtly, we buy into the script. We stop questioning and ignore the gut feeling that maybe those we are helping don’t want our help, don’t need our help…that maybe they have another script, another story that is just as true as ours.

The Blanket Exercise was created by KAIROS, a partnership of Canadian churches working for peace and justice.