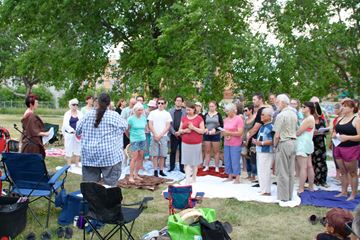 More than 50 community members gathered at Douglas Fluhrer Park on July 7 to participate in a Blanket Exercise.  Photo by Mandy Marciniak

On July 7, community members were invited to learn about the history of Canada – but from a different perspective than that which is typically heard.

Friends of Kingston Inner Harbour, PeaceQuest and members of the Four Directions Aboriginal Student Centre hosted a KAIROS Blanket Exercise at Douglas Fluhrer Park. More than 50 community members came out to participate and organizers were happy to share the experience with them.

“I describe the Blanket Exercise as the history of Canada, from a First Nations perspective, in an hour,” said Shannon Monk Payne who was helping lead the exercise.  “It really allows people to walk in the moccasins of indigenous people and to really experience what they experienced historically all the way up to where we are today in terms of our contemporary relationship with Canada.”

The KAIROS Blanket Exercise was developed in response to the 1996 report of the Royal Commission on Aboriginal Peoples, which recommended education on Canadian-Indigenous history as one of the key steps to reconciliation. The exercise covers over 500 years of history in one session and asks people to take on the role of Indigenous peoples in Canada.

Standing on blankets that represent the land, participants walk through pre-contact, treaty-making, colonization and resistance. They are lead by facilitators and are given cards and scrolls to help guide them and give them a role throughout the exercise. The exercise is followed by a debriefing session that gives participants an opportunity to discuss what they just learned.

Maracle has led many Blanket Exercises in the past, but most have been within Queen’s University and at the request of certain groups. The event held on July 7 was a bit different for her, but she hoped it would have similar outcomes.

“The biggest impact that I see from these exercises is that it changes how people view the history,” she said. “A lot of people tell me that they thought they knew the history of Canada’s Indigenous peoples but by actually having to take part and walk in their footsteps they realize they have only learned one side of the history.”

Monk Payne has had similar experiences with the Blanket Exercise and she has also seen a wide range of emotions emerge as a result.

“A lot times there is a lot of outrage, anger, sadness and disbelief,” she said.

The exercise also asks participants to step out of their comfort zone and Maracle tries to do the same when she participates too. Often she has run the exercise as the narrator, but for the exercise on July 7, she chose to take on the role of a European.

“Playing that role is an emotional experience because it is like I am looking at my own life experiences from the outside and it can be tough,” she said. “But if I am asking others to take on the tough task, I should do the same.”

Overall, Maracle and Monk Payne hope that the exercise is just the beginning in terms of community education about the history of the First Nations, and that the event inspires participants to learn more.