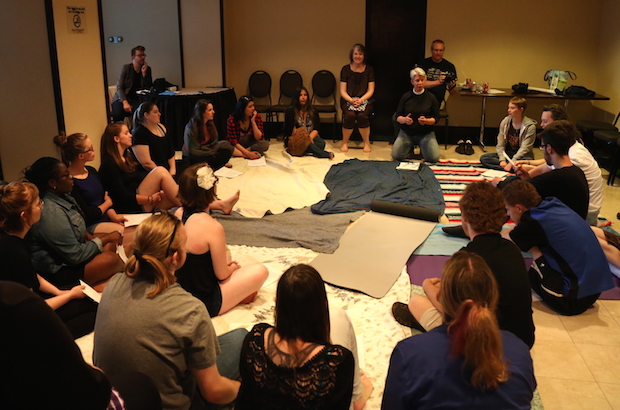 Originally published in the Anglican Journal on July 6, 2016 by André Forget.

As General Synod staff and organizers made the final preparations for the opening of the 41st General Synod of the Anglican Church of Canada, which meets here July 7-12, 21 youth delegates from across the country gathered in a small room in a quiet part of the Sheraton Parkway Toronto North Hotel & Suites to take part in a pre-synod orientation and ice-breaker.

In a six-hour session, the young Anglicans were given a crash course in the workings of synod and the rules that govern it, and encouraged to take their place at the table as members on an equal standing with even the most experienced synod veteran.

“We used to talk about young people as being the future of the church,” said Archdeacon Michael Thompson, general secretary of General Synod, in a question-and-answer period with the youth. “But what we know is that young people, by virtue of baptism and participation in the life of the church, are part of the church’s present in a really important way…without you, the church is diminished.”

Simon Chambers, communications co-ordinator for The Primate’s World Relief and Development Fund (PWRDF) gave a presentation on the rules of order, which included a mock synod that gave the youth an opportunity to see how a motion is brought, amended and voted on using Robert’s Rules of Order.

The Rev. Riscylla Walsh Shaw and the Rev. Sheilagh Ashworth, both of the diocese of Toronto, later led a blanket exercise, an interactive tool designed by the ecumenical social justice advocacy group KAIROS to teach the history of colonialism in Canada.

Many of the participants noted that despite having learned about the devastating effects European settlement had on Indigenous peoples in school, the blanket exercise drove the story home on an emotional level.

“It just put things in perspective, the whole story, in a way I hadn’t thought about it before,” said Esther-Ruth Teel, from the diocese of British Columbia.

The session’s organizer, Laura Walton, chair of the local arrangements committee and a delegate from the diocese of Toronto, said it is important to give young delegates their own synod orientation.

“Youth can often be at a disadvantage, legislatively,” Walton explained, noting that many young Anglicans don’t have a reason to know much about the church’s legislative process.

“I think it’s important that they feel comfortable in what they are doing,” she said. “They have a voice, and it is an important voice.”

However, according to several young delegates, one of the most useful things the session provided was simply an introduction to the other young Anglicans at synod.

Connor Blaikie, of the diocese of Rupert’s Land said he appreciated the fact that he would already know some “friendly faces” when synod starts tomorrow.

It was a point Sara Gateman, of the diocese of Calgary, seconded.

“Meeting all the youth was really good for me, just so I’m not going into General Synod not knowing anybody,” she said.