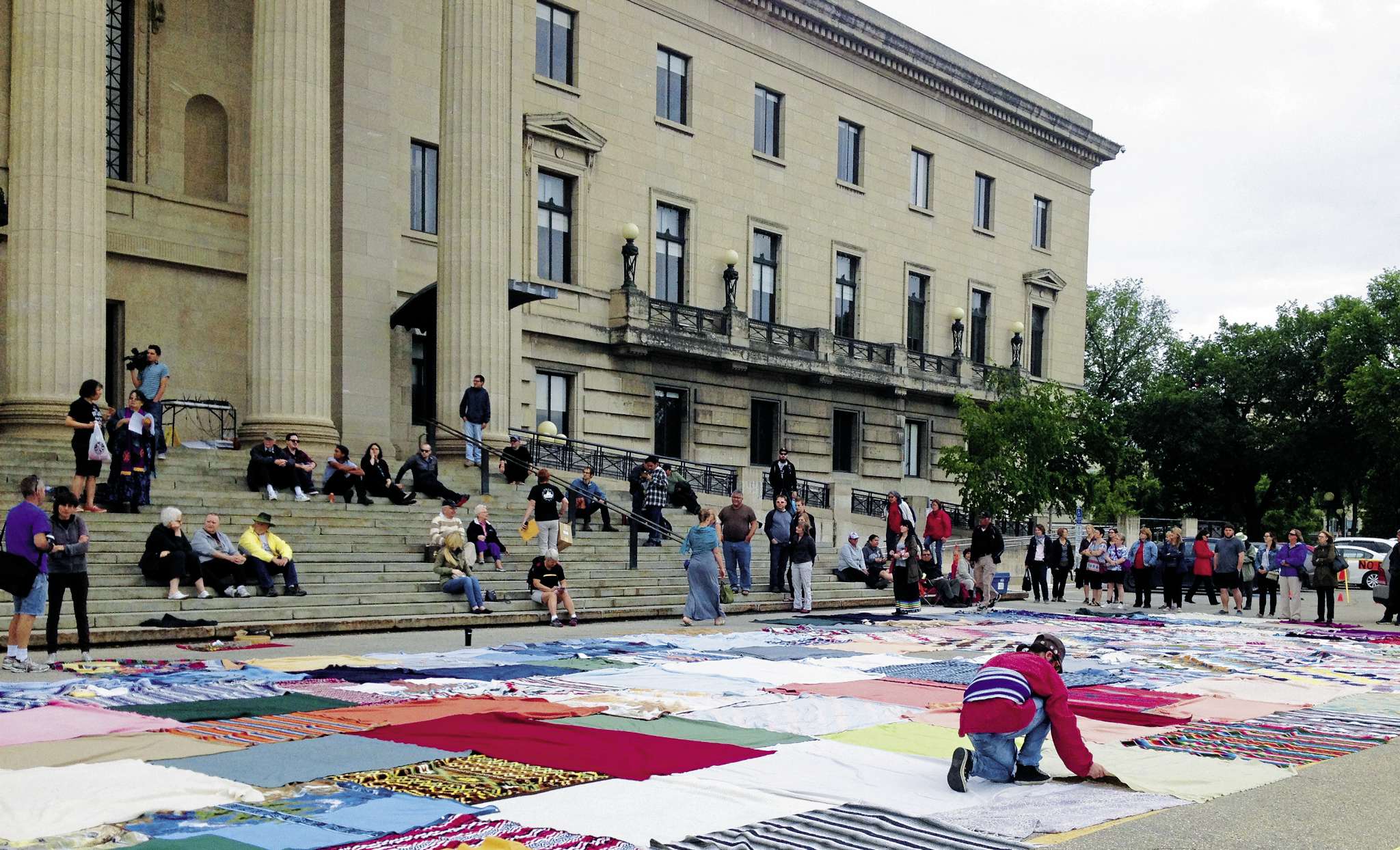 About 200 people took part in the Blanket Exercise at the Manitoba Legislative Building in early June.

On a Saturday in early June, about 200 people gathered in front of the steps of the Legislative Building to participate in the Blanket Exercise.

The Aboriginal Rights Coalition of KAIROS Canada, a faith-based organization dedicated to social justice, developed the Blanket Exercise along with Indigenous elders as a teaching tool to visually represent the history of Indigenous and non-Indigenous peoples in Canada.

The objective of the Blanket Exercise is to invite participants to step into the shoes of Indigenous peoples and to experience the impact colonization had and continues to have on Indigenous communities.

The scripts and research for the exercise are based on the Report of the Royal Commission on Aboriginal Peoples and it explains how Indigenous peoples once had access to all the land in Canada and now only one per cent of the land is “reserved for Indians.”

When my husband and I arrived at the Legislative Building, we added our blanket to a brilliant patchwork of about 100 other blankets already spread out on the concrete.

After introductions and explanations, participants were invited to remove their shoes and step onto the blankets.

The narrator began: “These blankets represent the northern part of Turtle Island, or North America, before the arrival of Europeans. You represent the Indigenous peoples, the original inhabitants.”

A variety of narrators told the story of how Europeans came to North America at the end of the 15th century. Initially there was respect and mutual agreements but Europeans had a different understanding of land ownership and treaties.

Characters playing the settler roles began walking through the crowd of “Indigenous” participants and slowly removed or folded corners of blankets. The settlers handed out different colors of cards to certain people and asked other people to leave the blankets all together. When blankets were removed, remaining participants crowded onto those that were left.

As the telling of the history unfolded, participants with yellow cards were asked to step onto a small collection of blankets that represented the residential schools.

Those with blue cards were asked to step off the blankets because they represented those who died of malnutrition. To represent the ’60s scoop, when Indigenous children were adopted by non-Indigenous families, participants were asked to crowd onto small scraps of blankets.

Until the 1950s, Indigenous peoples were not allowed to leave their reserves unless they had permits. To represent this part of the story, the characters playing the role of settlers disallowed those on the blankets to leave.

On June 11, 2008 Prime Minister Stephen Harper issued an apology for the residential schools. The Truth and Reconciliation Commission was created and collected stories from survivors. To symbolize this reawakening, blankets were placed back on the floor and corners of blankets were opened as a sign of healing.

In 2010, Canada approved the United Nations Declaration on the Rights of Indigenous Peoples.

More blanket corners were opened. The narrator ended the exercise with a call to action: “We need a new relationship and we need real change.”

Helen Lepp Friesen is a community correspondent for Fort Garry. You can contact her at helenfriesen@hotmail.com

The KAIROS Blanket Exercise “equips us for those reconciling conversations & relationships”