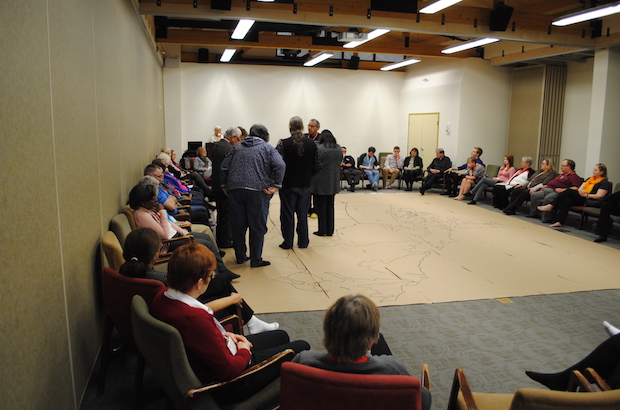 Originally published in the Anglican Journal on March 10, 2016, by Tali Folkins.

Council of General Synod (CoGS) members take part in “Mapping the Ground We Stand On,” an exercise developed by PWRDF staff.

Not all meetings of Council of General Synod (CoGS) are about sitting at tables and listening. On Thursday, March 10, sock-footed CoGS members moved across a massive map of Canada spread out on the floor as they took part in an interactive workshop recently designed by national office staff.

“Mapping the Ground We Stand On,” developed last fall by staff of The Primate’s World Relief and Development Fund (PWRDF) and Anglican Fund for Healing and Reconciliation, is a teaching tool not unlike the “Blanket Exercise” developed by Kairos Canada, an ecumenical social justice group. Like the Blanket Exercise,  PWRDF’s mapping activity is an interactive workshop intended to teach and inspire reflection among non-Indigenous Canadians about the settlement of Canada by Europeans and other non-Indigenous peoples—in particular, ideas such as the Doctrine of Discovery and of Terra Nullius(the Empty Land).

The ultimate aim, said PWRDF executive director Adele Finney, is to explore Indigenous and non-Indigenous history in such a way as to “help us take responsibility and positive action, to make us more aware of our history, of modern-day actions that continue that history, and of how we need to work together to change our attitudes and actions.”

Workshop participants began by sitting in a large circle around a massive map of Canada, drawn by marker on numerous large pieces of paper taped together. They listened as Finney first introduced the exercise, then asked them to imagine the land and ponder how they had been shaped by it. She talked about how long Indigenous peoples have lived in Canada and asked participants to sit in silence for 41 seconds, each second representing a millennium that First Peoples had lived in the land before the arrival of Europeans.

Finney then outlined five waves of immigration into Canada, from the first arrival of Europeans until the present day. As she narrated each wave, participants entered the map at a time and spot representing where and when their ancestors had arrived. They were  invited to talk with their neighbours on the map about the arrival of their ancestors, and to ponder their own identities.

Participants then listened as Anglican Healing Fund co-ordinator Esther Wesley described the impact of the Doctrine of Discovery and Terra Nullius, ideas, she said, which were formative in the first settlement of Canada by European Christians.

European notions that North America was essentially unknown and empty before their arrival, and that natural resources are only commodities to be bought and sold, were part of a historic “dehumanization” of Canada’s Indigenous peoples, Wesley said. These concepts and other ideas like them displaced the traditional knowledge of these peoples, making them seem no longer valid—and continue to have profound effects today, she said.

“The concept of ‘empty land’ usurped and destroyed much of the Indigenous peoples’ way of life,” Wesley said.

It’s important for people to learn about these ideas and their effects, she said, because improving relations between Indigenous and non-Indigenous people will require each to understand the other better.

Speaking as an Indigenous person to non-Indigenous people, Wesley concluded, “One thing you need to know about us is that we are resilient peoples. And that gift comes from God.”

After the activity, Suzanne Rumsey, PWRDF’s public engagement co-ordinator, asked participants to gather in groups of three or four and ponder how the exercise made them feel, how they intend to respond, and other questions.

Participants described emotional reactions ranging from anger and guilt over Canada’s history to gratefulness for being part of a culture in which this episode of history, however unfortunate, is at least openly discussed.

Henriette Thompson, director of witness for social and ecological justice, said that, far from being a dead historical concept, Terra Nullius lives on in the way many people today conceive of the Arctic—one of the places on the earth, she said, now most threatened by climate change.

National Indigenous Bishop Mark MacDonald said that although he loved the exercise, he hoped it would encourage people to feel not just sadness for what happened in the past but also concern for the future.

“One of the dangers of an exercise like this is that people feel sad about what happened and don’t notice what’s happening,” MacDonald said. “I think that the larger population in North America, perhaps around the world, thinks about what happened to Indigenous people as being a sad thing, something that happened in the past.” But, he said, “The reality is that for Indigenous people it’s ongoing and accelerating” in the form, for example, of today’s child welfare and prison systems.

In response, Rumsey said PWRDF is hoping to develop a resource guide for its own use that would look at some of its current work with First Nations people in Canada, and consider where it should go next in that regard.

“Stay tuned for that—that’s the next chapter of this,” she said.