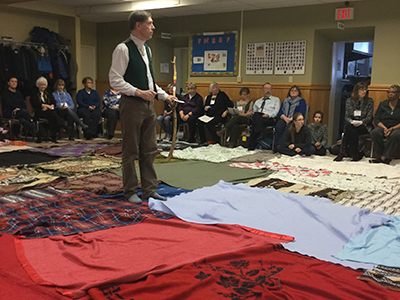 Centred on the theme of reconciliation and right relations with Indigenous people, the event was sponsored by the Headwaters Indigenous Awareness Group of Orangeville and Dufferin KAIROS.

Dr. Daisy Radigan of Georgetown was the leader and facilitator, with Alton-based town crier Andrew Welch, as the narrator and Mi’kmaq musician and educator Cathy Elliott drumming and singing a song about “being together.

“Following the exercise many people responded with feelings of shame and sadness,” Mr. Lindsay told the Citizen, “questioning why these events had happened and why they had not known.”

KAIROS teamed up with the Headwaters Indigenous Awareness Group and three local churches – St. Mark’s, Westminster United and Tweedsmuir Presbyterian – to sponsor the Blanket Exercise with the aim of helping the Truth and Reconciliation Commission process to move forward.

“We put the blankets on the ground and that acted as Canada,” said 14-year-old Kayla Cruikshank of Shelburne, who attended the event. “Slowly, the blankets shrunk and the actors died as a result of the Europeans. I found the exercise very educational. My grandma, Ruth Cruikshank, helped with the meal which was Three Sisters Soup, Corn Chowder and Bean Soup as well as Bannock.”

Participants at the event read from scripts as the voices of First Nations people, describing their way of life and events that affected and destroyed that existence; most prominently the arrival of Europeans, treaties, land appropriation and forced assimilation. As their history unfolded, blankets representing their once-vast tribal nations were scattered and many disappeared.

An important recommendation coming out of the Truth and Reconciliation Commission report last year called for a new and accurate school curriculum teaching the indigenous experience and their contributions to Canada. The Blanket Exercise initiative is now being used to shed light on a very dark side of Canadian history inside Ontario classrooms.

“My thoughts about the blanket exercise are that it was a very unique and creative way to demonstrate what happened to the First Nations when the Europeans came to Canada,” said 13-year-old Sarah Bannon, a grade eight student at Glenbrook Elementary who attended the event on Sunday. “The exercise had audience participation, music, and time to share your feelings.  It was a great learning opportunity for people of all ages and I am thankful that I went.”

Mr. Lindsay says the event is “in keeping with KAIROS’ strategic plan for 2016-2020. We are trying to encourage reconciliation, which means a change in attitude, increased education and a change in our relationship with indigenous peoples.”

Originally published in the Orangeville Citizen on January 26, 2017.