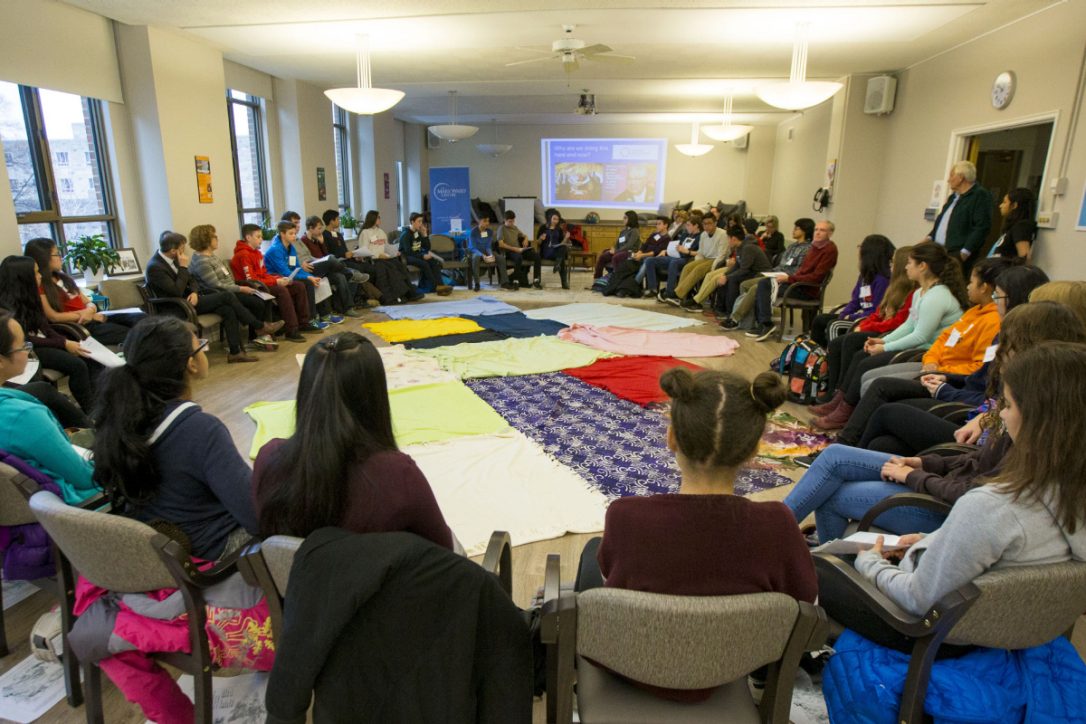 Blankets, a script and a circle of people provides a powerful lesson to classes from the Toronto Catholic board

The blankets represent Turtle Island (North America) before the exercise. As part of its endeavour to get students to learn history from an indigenous perspective, the Toronto Catholic school board has introduced the often emotional blanket exercise.Photo by CARLOS OSORIO/TORONTO STAR

Three dozen high school students in stocking feet wander quietly over colourful blankets spread across the floor. They are roaming their land. It is centuries ago, and they inhabit a vast place that will one day be known as Canada.

“You represent the indigenous peoples, the people who have been here for at least 10,000 years,” their narrator tells them.

“Long before the arrival of Europeans, Turtle Island was your home, and home to millions of people like you.”

In reality, they are students from five Toronto Catholic high schools engaged in the KAIROS blanket exercise, a powerful interactive lesson that teaches indigenous history through re-enactment.

The morning begins with 13 blankets, a script and a circle of teenagers. It will end with a new perspective of Canada that for too long has not been taught.

As the 45-minute session unfolds, students with numbered scrolls take turns reading in the voices of First Nations people, describing their lives, how “everything on the earth is to be respected” and how events affect them.

Their observations are punctuated by the arrival of Europeans and what follows, from the time of the earliest treaties that begin the process of appropriating their land, through colonization, forced assimilation and resistance.

Some students hold coloured cards handed out at the beginning of the exercise. Throughout it, they are asked to leave — one group representing the millions wiped out by smallpox, measles and other diseases brought by settlers, another for those lost to starvation. Later, there’s a chilling moment of silence to honour children torn from their families and forced to attend residential schools many miles from their homes.

With each encroachment, blanket edges are folded back as indigenous lands shrink. By the end, what remains is a fraction of the original population, several crumpled blankets strewn across the space and some dislocated students on the bare wooden floor.

In the talking circle that follows led by elder Bob Phillips, an aboriginal educator of Mi’kmaq heritage, some teens speak about the injustice. Others remark on how much they hadn’t known. Many are speechless.

“It was eye-opening to see how the land was changed so much over time, going from great space to withering away,” 13-year-old Maddy Driscoll said later during a break.

Lessons in school about indigenous history “only scratched the surface,” added the Grade 9 student at St. Joseph’s College School.

“Because of this (exercise), I want to know more.”

The blanket exercise is a far cry from social studies taught to earlier generations of Canadians based on the notion that North America “began” in 1492 when Christopher Columbus sailed the ocean blue.

It’s also a powerful one as students connect with a dark side of Canadian history that’s only recently emerged in public consciousness as the result of a growing social movement and the Truth and Reconciliation Commission of Canada.

Acknowledging and teaching the truth about the damage inflicted on indigenous people is considered the first critical step toward reconciliation.

Matthew Varriale, 14, said watching the blankets constrict gave him goosebumps. So did his role representing children lost to residential schools — those who died, never returned home or were unable to reconnect to their families and communities.

“I learned so much today,” said Matthew, who’s in Grade 9 at Brebeuf College School. “It made me realize how much I really don’t know about the abuse of aboriginal people. This should not be overlooked.”

By the end of the current school year, 900 students from the Toronto Catholic District School Board will have participated in the blanket exercise, thanks to a partnership launched this fall between the board and KAIROS Canada, an ecumenical group of churches that promotes social justice and education and also provides the program to other groups.

Every Wednesday throughout the school year, Kairos facilitators and indigenous elders lead Catholic board students in grades 4 through 12 at the University of Toronto’s Mary Ward Centre for Education, Spirituality and Justice.

The day-long experience opens with a smudging ceremony and finishes with an afternoon of art, with students responding through creations of clay, paint or fabric.

The initiative is one of a number that schools are using to enhance indigenous learning in the wake of the Truth and Reconciliation Commission report last year, which called for new curriculum from kindergarten through Grade 12 that accurately reflects aboriginal experiences and contributions to the country.

Developing the curriculum will take time, but school boards are taking steps to incorporate learning opportunities however they can, ranging from daily acknowledgments of the traditional territories they are situated on during morning announcements to visits from local elders or programs such as the blanket exercise.

Resources are in demand. Within 24 hours of announcing the Kairos partnership, every slot was booked through the end of May, says Vanessa Pinto, a First Nations, Métis and Inuit program support teacher with the Catholic board.

The impact of this exercise, she says, comes from engaging students’ senses so they’re learning “intellectually, emotionally, physically and spiritually.”

The powerful emotions evoked by the blankets are an important part of the learning.

“It was very interesting and a great metaphor,” said Daniel Wenzl, 15, of Father John Redmond Catholic Secondary School, who said he came away humbled and saddened but determined to learn more.

“You can read about things all you want, but making it interactive and personal makes it more impactful.”

To elder Bob Phillips, teaching kids in a meaningful way that changes how they feel about their history and indigenous Canadians is critical for reconciliation because today’s students will be tomorrow’s leaders with the power to change attitudes and policies.

Originally published by the Toronto Star by Andrea Gordon on December 26, 2016.