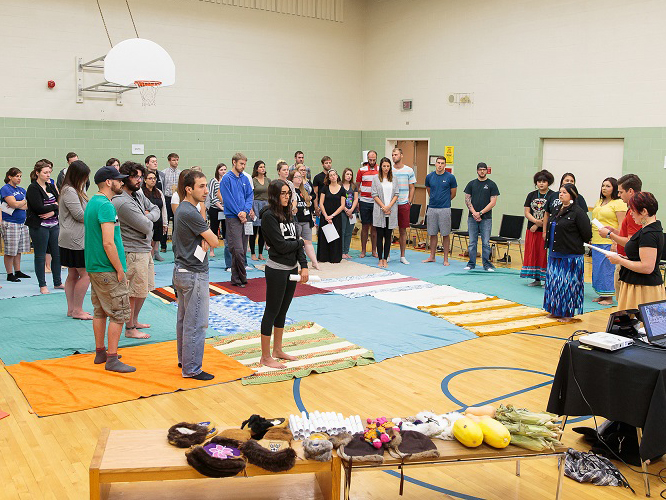 Teach For Canada teachers, now accustomed to daily sessions held in the Avila Conference Centre, were slightly taken aback when they were led to the Lakehead University gymnasium this morning to find twenty blankets of varying size and colour sprawled out across the hardwood floor.

When teachers were given a variety of goods—ranging from squash to string beans—and were told to stand on the blankets, it was even more unclear what to expect next.

This disorientation soon gave way to a very emotional atmosphere. Bit by bit, the blankets were folded up and separated from one another by newly-arrived Europeans. As blanket space diminished, so too did the number of teachers remaining on the blankets—some were lost to disease, some to malnutrition, some to residential schools, and others to abuse. By the end, what was once one giant, interconnected, and vibrant blanket mosaic representing Turtle Island had become a series of small blanket reserves occupied by only a fraction of the people with which we had begun.

An interactive and jarring allegory for Canada’s colonial history, the blanket exercise left Teach For Canada teachers more aware of the history of the communities in which they will be teaching this September. But as facilitator Shannon Payne—an experienced northern educator and a member of St. Theresa Point First Nation—explained, the purpose of the exercise was not to incite the guilt or shame that many teachers instinctively felt after completing the exercise. Instead, it was intended to educate and compel teachers to be active and informed participants in the reconciliation process.

After completing the exercise, a healing circle was formed to share feelings and support one another after the impactful exercise. An Elder from Eabametoong First Nation—Bernard Nelson—and his family led the healing circle, and it was followed by a group bannock-making session led by Tammy Nelson and Shannon Payne. Physically and mentally exhausted, the teachers ended the day by enjoying the fruits of their labour: a delicious feast of bannock, maple butter, and fresh strawberries.

“By the end, it was really just an absolutely emotional day for everyone—everything became a lot more real,” said one Teach For Canada teacher.