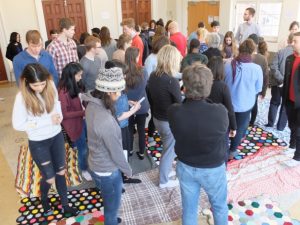 On an early spring day, dozens of students, faculty and other members of the University of Toronto law school community who have gathered in Rowell Room in Flavelle House listen quietly as they are warned that what they are about to experience will not be easy.

They have come to participate in the Blanket Exercise, a step on the path to a reconciliation that has been hundreds of years in the making. Along the way, they hope to learn about and engage with an often tragic history, one that will give them a better understanding of the issues many Indigenous people face today.

“It will be really difficult for some of you to hear these things, and you might want to cry, or hug a friend, or step out for a moment,” says Amanda Carling, JD 2012, manager of the Indigenous Initiatives Office at U of T’s Faculty of Law.

“But the reason to tell you this is not to make you feel guilty, or bear the burden of this. We’re here to learn, and support each other.”

As he prepares for a traditional smudge ceremony to begin the exercise, Elder Robert “Bob” Phillips shares some of his own life experiences in a calm and friendly voice that belies the ugly truth of what he is saying. 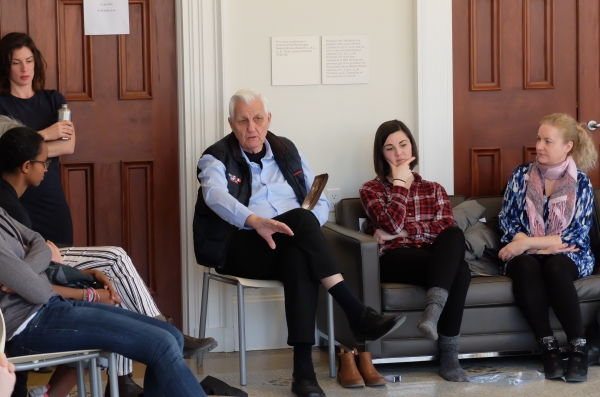 “When I went to school, teachers would say things like: ‘You just be quiet, you little savage,’ and other times they’d call me stupid,” says the 72-year-old Phillips, who was born in Nova Scotia but grew up in west end Toronto.

Thrown out of the school system in Grade 12 on the whim of his French teacher, “even to this day, I sometimes have the feeling that I’m stupid,” adds Phillips, a polyglot with a PhD in Indigenous studies.

His great-grandfather bought a farm outside the Pictou Landing reserve in Nova Scotia so that his descendants would no longer be considered “Indians” under federal law, and their children would therefore be protected from being taken away to residential schools.

His mother would often admonish him to never tell anyone he was “an Indian,” but to instead claim he was English, French or Scottish.

His great-grandfather bought a farm outside the Pictou Landing reserve in Nova Scotia so that his descendants would no longer be considered “Indians” under federal law, and their children would therefore be protected from being taken away to residential schools.

“Now I understand why great grandfather would do that,” says Phillips.

As the exercise begins, blankets are spread across the floor of the large room to represent Turtle Island, the name many Indigenous people gave North America in their creation stories.

Observers become participants as they are asked to stand and start walking on the blankets, symbolizing the movement of Indigenous people across their traditional territories before settlers arrived.

Some of the participants are given scrolls to read to the room, many containing a shocking litany of wrongs committed by settlers against Indigenous populations: First Nation, Inuit and Métis people.

First Nations communities alone signed more than 300 treaties with Europeans in the 1700s and 1800s, ceding millions of square kilometres of land. Other Indigenous people had lands taken despite never signing agreements.

Gradually, blankets are removed as traditional lands are taken by settlers. Participants designated to represent Indigenous people who died from diseases or were assimilated are asked to step off the blankets.

Some Indigenous people fought back, but were eventually defeated. The 1876 Indian Act accelerated a process of aggressive assimilation, which continued with residential schools that broke up families and isolated individuals from their culture. Many turned to drugs and alcohol and were incarcerated.

The wounds and social ills that started with these policies are still present today, the room is told.

While Indigenous peoples make up about four per cent of the Canadian population, they comprise almost 25 per cent of federal prison inmates. There are more than 30,000 Indigenous children in the care of the state, more than ever attended residential schools.

Over half of drinking water systems on reserves pose a significant risk to human health. Sixty per cent of houses on First Nations reserves are in need of repair, and 85,000 new units are needed.

Indigenous women are 3.5 times as likely to experience violence as non-Indigenous women. There are more than 1,100 reported cases of Indigenous women and girls who have gone missing or been murdered since the 1970s, a number that is almost certainly underestimated.

“I want everyone to take a look around and recall what Turtle Island looked like at the beginning of the exercise, and what it looks like now,” says Carling.

Almost two thirds of land reserved for Indigenous peoples has “disappeared” since Confederation.

“I think as Canadians we like to pride ourselves on the fact that while our systems are not necessarily perfect, at least it’s better than United States,” says Carling, who has organized a series of blanket exercises throughout the academic year.

“But in fact, all the reserve lands in Canada combined would not cover one half of the reservation held by Arizona’s Navajo Nation.”

As the year’s final blanket exercise comes to a close, Carling and Phillips strike an optimistic tone, even as participants grapple with the emotions of the experience. They note that many in the room are future lawyers who can take what they’ve learned with them as they begin their careers.

“It may take a while for society to change what it believes, but I think the people in this room will have a tremendous impact on that within the next five to 15 years,” says Phillips.

The lesson and the message are not lost. 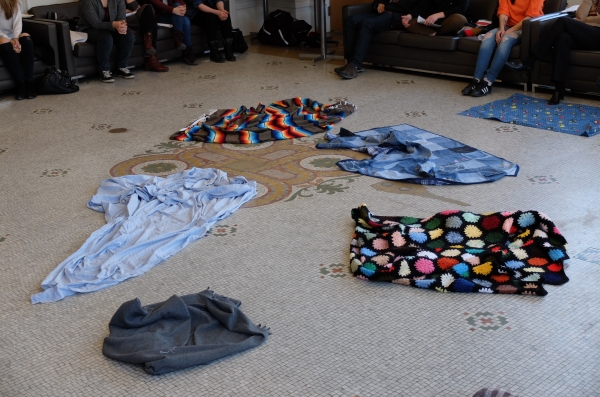 “As a Canadian, I appreciate the opportunity to reflect on and connect with my own history as a settler descendant person,” Amy Swiffen, a grad student in Aboriginal law, says afterwards.

“I’m also grateful to the generosity of the Elder and Indigenous people here for engaging with settler society, and the kindness and warmth with which they received us. It’s remarkable and moving to see that generosity of spirit.”

Elizabeth Creelman says she came into law school as a history undergrad who knew almost nothing about Indigenous history.

“It was really moving to see the whole history laid out in a visual way like that,” says Creelman, a 2nd year law student. “That was a poignant way of learning it.”

Genevieve Ryan, a 4th year law student from Chilliwack, B.C., says the exercise gave her an epiphany about her own upbringing.

“I don’t think it ever occurred to me until today that I grew up near several reserves, yet how many of those kids did I see in my school? The only one I can think of disappeared after Grade 10.”

Originally published on the University of Toronto, Faculty of Law website on April 7, 2017.Written by Peter Boisseau / Photography by Lucianna Ciccocioppo.