Skip to content
Posted inArticles
Posted by By Connor Sarazin December 2, 2019No Comments 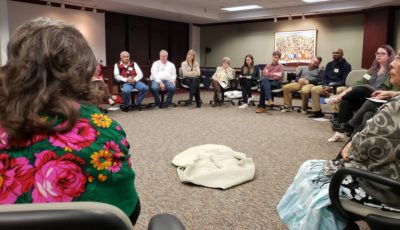 This article appeared in 9and10news.com on Nov. 19 and was authored by Brighid Driscoll.

Jared is the pastor of Watershed Church in Traverse City, Michigan and the church is hosting its first blanket exercise this Saturday at the Traverse Area District Library. The workshop is open and free to all, and it’s intended purpose is for people to understand the history of Native land.

The blanket exercise is an hour long, interactive history lesson that was started by KAIROS Canada in order to foster reconciliation with Indigenous people. The exercise is guided by a facilitator and begins with blankets spread out all over the floor. The blankets are representative of North America and attendees will stand on different blankets that represent different parts of the continent. The facilitator acts as the part of European explorers and settlers and walks participants through life before settlers, all the way to resistance. Participants represent different tribes in different parts of North America, and as history progresses the tribes end up closer and closer together as they lose their land and end up on reserves.

The exercise began in 1997 as a response to the report of the Royal Commission on Aboriginal Peoples in 1996 and has been performed across Canada and the United States thousands of times since. In recent years the idea of Columbus discovering North America has become less widely accepted. Many of us were raised with history lessons that came from a pro-colonization perspective and were not taught that Native people lost their home. Jared hopes that the Indigenous perspective of the exercise will open peoples minds up to understanding the bigger historical picture. Continue reading the article here.