Skip to content
Posted inArticles
Posted by By KAIROS Canada June 26, 2018No Comments 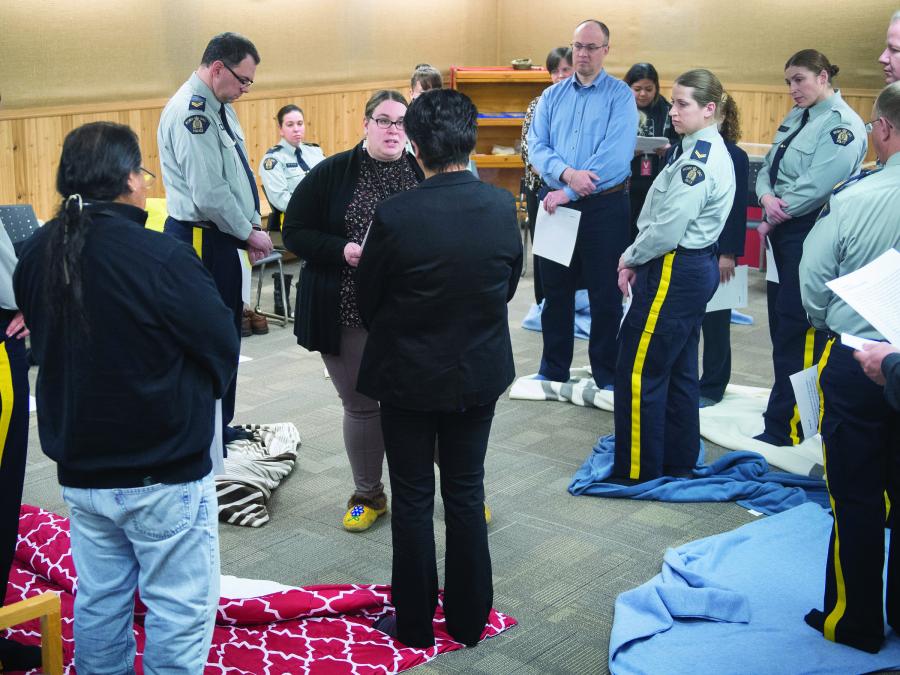 Instructors at the RCMP Academy in Regina, Sask., are trained on how to do the blanket exercise.

The exercise synthesizes 500 years of colonization under the observation of a local Indigenous elder.

This past winter, the RCMP introduced a new educational tool at its Regina training academy: the KAIROS blanket exercise. Developed by its namesake ecumenical advocacy organization, which includes The United Church of Canada as a member, the exercise is a group activity that synthesizes 500 years of colonization into one and a half hours under the observation of a local Indigenous elder.

The exercise is very emotional, says Sarah Longman, a Cree educator in Regina. “I have been an educator for 26 years. I’ve worked in anti-racist education, and this has, by far, been the most effective tool I’ve seen.”

Participants are arranged on a series of connected blankets, representing ancestral lands prior to colonization by European settlers. Over the course of the session, these blankets are either removed or folded into smaller squares by facilitators who represent European settlers, government agents, clergy and treaty makers — rendering these metaphorical territories ever smaller. Participants are relocated, isolated or removed from their blankets altogether, until the remaining arrangement of squares bears little resemblance to what started as unobstructed access and rights to the land now known as Canada.

Nathalie Fehr, a curriculum designer at the RCMP Academy, says the organization sought out the exercise after learning about it through national media coverage. The activity is now a permanent feature of the academy’s 26-week training course.

In Saskatchewan — where all RCMP cadets are trained, regardless of where they are to be deployed — the federal police force has an often difficult and troubling relationship with Indigenous communities. It had an early role in removing Indigenous people from their ancestral lands and rounded up children under the residential school system. More recently, the RCMP has been criticized for failing to fully investigate cases of missing and murdered Indigenous women and girls.

In March, the Civilian Review and Complaints Commission of the RCMP announced it was investigating local officers’ handling of evidence in the case of Colten Boushie, a Cree man shot and killed by Gerald Stanley, a white farmer, who was acquitted of second-degree murder. In February, there were media reports that an RCMP officer posted inflammatory comments on Facebook, including a remark that Boushie “got what he deserved.”

Fehr hopes that the blanket exercise can be a step toward reconciliation. “Our hope with the work we’re doing in educating our cadets is that they will leave here with an understanding of their role and the expectations that the organization has, and to work with our Indigenous nations in a positive, respectful way,” she says. “From how the cadets react — and they really embrace the blanket exercise — I feel that we’re giving them some great information, and it’s up to them to take that information, move forward and do their job.”

While Longman applauds the RCMP’s use of the exercise, she notes that this is only where the hard work begins. “This is not reconciliation,” she says. “The truth can be quite discomforting, [but] it’s very difficult to move forward with reconciliation without that truth being known. This is a tool to lead people to understand the reconciliation work that they need to do themselves. That’s the hope.”

Wanda Schmöckel is a writer in Regina.