Skip to content
Posted inArticles
Posted by By Connor Sarazin August 8, 2018No Comments 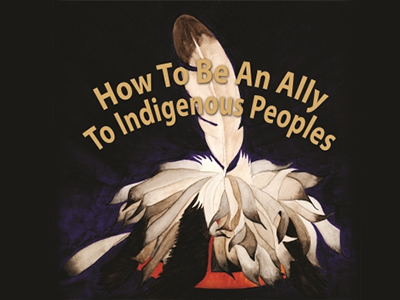 Sue Eiholzer, of Jamesville, N.Y., read the script. Her voice cracked and her eyes welled up in tears as she worked to stay composed before the room of participants standing on blankets.

She whispered to her co-facilitator, “This gets harder every time I do this.”

Eiholzer, is a founding member of the Neighbors of the Onondaga Nation (NOON), and is a facilitator for the local version of the KAIROS Blanket Exercise, also called, Witness to Injustice: Unraveling Historic Native and U.S. Relations. Held locally for the first time in October 2017 at the Matilda Jocelyn Gage Center for Social Justice and Dialogue in Fayetteville, N.Y., the KAIROS Blanket Exercise has been used across Canada as part of the country’s truth telling processes, and is now being offered in the area. This participatory event unravels Indigenous history in a compelling experiential way.

Clan Mother, Freida Jacques said she became involved when members from NOON brought KAIROS into CNY. “In my opinion after reading the first effort of the original KAIROS blanket exercise, I felt it really only ended with the participants feeling pity for Native folks. I, and Noon members did not feel this was what we wanted, pity,” she said. “NOON members began to gather history from our area to include in the CNY version and I would edit their efforts.”

“The results were successful and it helps people understand what we have been through – one thing after another, and it shows that we have been very resilient! I have since sat in on a few of these exercises as a Native elder.”

Recently, NOON held a training certification in the KAIROS blanket project in Onondaga. “A Native person needs to be included with each Witness to Injustice event,” Freida said.

“I’ve never been in a setting where we are asked to imagine what it is like to be a Native American person. That process of imagining was novel for me, disturbing, but ultimately positive to imagine myself standing in a place that I call home and have it taken away from me”

“During the recent Witness to Injustice certification training at the Nation fire barn, several Ongwehonwe folks were involved. At least 5 from our community, and a couple were from western N.Y. This event trained the group to help conduct other Witness to Injustice events in other parts of the State. This was in cooperation and approval from the KAIROS group in Canada. There is interest in the Western part of the State to include historical events that their people have been affected by,” she said.

A member of NOON, Squillace, her husband Jack Manno, and several Ongwehonwe members adapted the Blanket Exercise to include Haudenosaunee history such as the Sullivan-Clinton Campaign. Squillace is a co-facilitator alongside Eiholzer and others, and facilitates the adapted Blanket Exercise for audiences in this region. A bereavement counselor, Squillace said this exercise helps individuals to not only learn the true, untold history in North America, but also to feel the chilling hand of colonization and the role it played in the injustices indigenous peoples experience. Something that simply reading a book does not provide.

The Blanket Exercise was developed by the KAIROS organization in Canada in response to the Royal Commission on Aboriginal Peoples report in 1996 that sought to foster justice and peace between Indigenous and non-Indigenous peoples of Canada. Through reports, community visits and testimony, the Canadian government placed itself among the colonizing governments that had done wrong to Indigenous people.

“Please step off the blanket,” Cindy Squillace told certain participants at the October event in Fayetteville, as they were suddenly exiled from the group and sent to another side of the room, which represented North America.

“I’m always keeping an eye out for anyone having a difficult time with it. No one has ever said ‘I can’t handle this’ and left, but often you hear gasps and expressions of emotions when going through it.”

She said “people are appalled and surprised by what they learn as they are taken through 500 years of history in two hours.”

Sunderlin lives across the street from the Gage Center after having lived many places around the world, he’s returned to Syracuse for the community and community events, like the Blanket Exercise that he thrives on.

“It was a powerful event for me. It had less to do with information than compared to an emotional response,” Sunderlin said.

“I’ve never been in a setting where we are asked to imagine what it is like to be a Native American person. That process of imagining was novel for me, disturbing, but ultimately positive to imagine myself standing in a place that I call home and have it taken away from me;” he said, “and being eliminated as part of a national development plan with no apologies, and no excuses.”

“It made me feel a sense of responsibility and I was glad for the closing statement, that this is not an occasion in which we need to feel shame, but instead our common humanity and a sense of rededication to doing the right thing.” Sunderlin also joined the training on the Nation to become certified in this training.

Eiholzer said if she had to sum it up, this exercise allows people to see how little they know and understand.

Squillace, said the Blanket Exercise helps individuals to learn a massive amount of history they are not taught in school, and that it’s powerful and emotional, but in regard to what people do know. “We have a long way to go,” she said.

Freida said a Witness to Injustice program will soon be offered with SUNY Environmental Science administrators.

“Since much of our history is either minimally taught and not accurately, this is a good way to help people learn about these events and share their feelings about what occurred.”

Why this blanket exercise is now essential training for RCMP cadets