Skip to content
Posted inArticles
Posted by By Connor Sarazin October 22, 2019No Comments 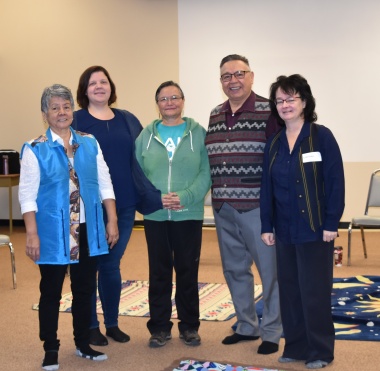 The KAIROS Blanket Exercise is a program of KAIROS Canada, a charitable organization focusing on human rights and ecological justice. The organization was founded in 2001 when 10 previously existing inter-church coalitions joined forces, with the goal of increasing compassion towards others across the world.

According to the organization, the KAIROS Blanket Exercise was “developed in response to the Report of the Royal Commission on Aboriginal Peoples in 1996, which recommended education about Canadian-Indigenous history as one of the key steps to reconciliation.”

The 90-minute workshop is a unique, interactive and participatory history lesson developed in collaboration with Indigenous Elders, knowledge keepers and educators. During the exercise, participants are guided through more than 500 years of shared history between Indigenous and non-Indigenous peoples. The exercise has been updated by KAIROS several times to include new information, such as the 2015 Truth and Reconciliation final report.

In 2017, Honourable Premier John Horgan and Minister Doug Donaldson committed to fully implementing and adopting the United Nations Declaration of Rights to Indigenous Peoples (UNDRIP) and the Truth and Reconciliation Commission’s Calls to Action. In Article 57 of the Calls to Action, the Commission says public servants should be educated on the history of Aboriginal people and receive “skills-based training in intercultural competency, conflict resolution, human rights, and anti-racism.”

Provincial government staff are involved in active negotiations with local First Nations. In the Cariboo region these include the Tsilhqot’in Nation, Northern Shuswap Tribal Council, Southern Dakelh and Esketemc First Nation. These types of training benefit government staff by increasing their understanding of the cultural differences and Indigenous history so they can approach these important negotiations with more empathy.

Locally, the Blanket Exercises have helped us to fulfill this call.

Participants begin the exercise standing on blankets, which have been arranged on the floor to represent the land before settler contact. By moving or removing blankets at key moments, leaving some participants isolated and others crowded together on smaller and smaller pieces of fabric, facilitators illustrate how Indigenous peoples have been impacted by the reserve system, residential schools and other actions and events.

We have been honoured to have Irvine Johnson and Charlotte Gilbert as our trained KAIROS facilitators.

Irvine Johnson is an elder from the Esk’etemc community and Charlotte Gilbert is an elder from the T’exelc (Williams Lake Indian Band) community. Irvin and Charlotte include their personal stories of residential schooling in the presentations, providing a real connection to the content of the Blanket Exercise. In October 2018, we were also very fortunate to have former Chief Bev Sellars from the Xats’ull First Nation and author of They Called Me Number One and Price Paid: The Fight for First Nations Survival participate in the Blanket Exercises.

Although they are discussing a very serious topic, Irvine and Charlotte include humour in their presentations, as part of making participants feel comfortable and receptive to their message. Some of the feedback from government staff includes “It filled in the gaps for me,” “I really liked the participatory nature of the exercise,” “best course I have taken” and “I got a lot more out of this presentation than reading a history book.”