Skip to content
Posted inArticles
Posted by By Connor Sarazin June 12, 2019No Comments 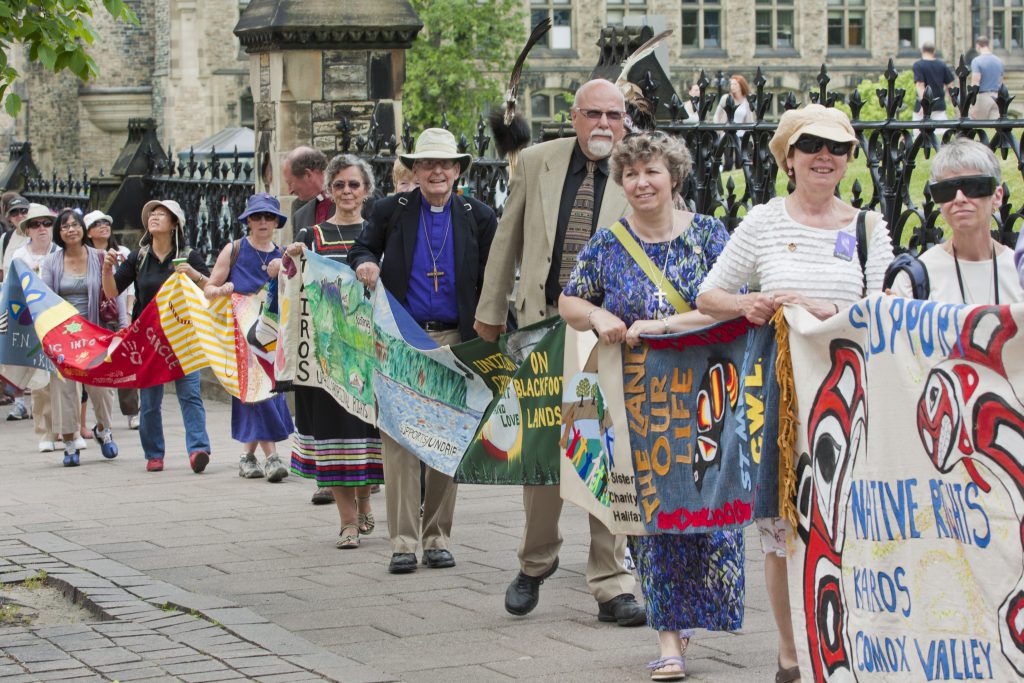 This article was first published on kairoscanada.org on June 11.

We are hopeful that in a matter of days the Senate will vote to adopt a private member’s bill that would
require the federal government to begin in earnest the work of implementing global human rights
standards to protect the cultures, lives and well-being of Indigenous peoples.

Bill C-262, a Bill to implement the United Nations Declaration on the Rights of Indigenous Peoples, is a
vital and necessary step for reconciliation in Canada, consistent with the Truth and Reconciliation
Commission’s recognition of the UN Declaration as “the framework” for reconciliation. However, some Conservative Senators have already used stalling tactics to delay the Bill’s passage through the Senate and there is concern that they might use such tactics again to prevent a final vote. These Senators have claimed to support the UN Declaration and the rights of Indigenous peoples while asserting that Bill C-262 is “rushed” and that Parliament has not had the opportunity to understand the “far-reaching” implications of implementing the UN Declaration.

Nothing could be further from the truth.

Bill C-262 was adopted by the House of Commons more than a year ago following Committee hearings in which 71 witnesses were called. The Bill has now been subject to further consideration in the Senate. More to the point, the UN Declaration itself is not new or unknown. It rests on a foundation of long established international human rights standards that have been subject to extensive debate in Canada and internationally.

The UN Declaration was the product of more than two decades of deliberation within the UN system
before its adoption in 2007. No other international human rights instrument has been subject to such
long and rigorous consideration. Critically, Indigenous peoples from Canada and federal officials both
played an active role in this lengthy process.

Since its adoption in 2007, the Declaration has also been reaffirmed ten times by consensus resolutions
of the UN General Assembly. No State in the world currently objects to this human rights instrument.
Furthermore, all the provisions of the Declaration reflect norms and standards that were already
established in international law when the Declaration was adopted. This includes provisions on self determination contained in international treaties ratified by Canada in the 1970s. Because of the Harper government’s initial opposition, the UN Declaration has also been the subject of
extensive public debate in Canada, including within Parliament.

In 2010, the Harper government issued a formal statement endorsing the Declaration, adding that the
government was “confident” that the Declaration could be interpreted “in a manner consistent with our
Constitution and legal framework.” According to the statement, the basis of that confidence was having
reviewed the Declaration, listened to Indigenous leaders, and learned from the experience of other
countries.

In its Calls to Action, the Truth and Reconciliation Commission of Canada has called on federal and other governments to fully implement the UN Declaration as “the framework” for reconciliation.
Bill C-262 is itself modest in scope. Canada has repeatedly committed to implement the UN Declaration.
The Bill would create a legislative framework to guide the federal government’s role in that work of
implementation.

Critically, the Bill does NOT have the effect of codifying the Declaration into Canadian law.
Bill C-262 calls for a process by which federal laws can be reviewed in a systematic and collaborative way
to ensure that Canada’s commitment to uphold the UN Declaration is being met. It would be up to
Parliament to enact any required legislative changes identified in this process.

The Bill also calls for the government to collaborate with Indigenous peoples in developing a broader
national implementation plan. Parliament would be provided an annual report on the progress being
made.

Surely this is a better way forward than the piecemeal, uncoordinated and often contradictory approach
taken to meeting Canada’s international human rights commitments?

The Liberal government has shifted position to fully support Bill C-262 just as the Conservative
government before it changed its position to formally support the UN Declaration. By setting out a
legislated requirement to move ahead with the work of implementation of the UN Declaration, Bill C262 provides an important insulation against whatever political winds may blow under future
governments. Anyone who supports implementation of the Declaration should support such a measure.
Because there is no basis for claims that C-262 has been rushed, our Nations and organizations call on all Senators to ensure the Bill is brought to a vote in a timely fashion and passed into law during this
session of Parliament. If, instead, some Senators continue to employ procedural tactics to essentially kill
the Bill, and oppose the human rights of Indigenous peoples, this will be a very regressive and shameful
landmark in the history of the Parliament of Canada.

The Coalition for the Human Rights of Indigenous Peoples (https://www.declarationcoalition.com)

This statement was endorsed by the following organizations and individuals:

For more information on implementation of the UN Declaration, please see our new factsheets at https://www.declarationcoalition.com/more-info/