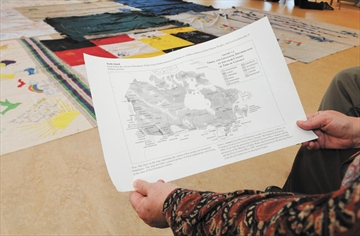 Originally published in the Burlington Post on October 21, 2010 by Nikki Wesley.

The blanket exercise covers 500 years of Canadian history in one hour — from the indigenous people’s viewpoint.

The folding blankets, showing how indigenous land shrank into reserves with the arrival of European explorers, were used at Tansley United Church last Saturday (Oct. 16).

“We’re trying to bring people up to speed on the other side of the story,” exercise leader Ed Bianchi said in an interview beforehand.

There has been no information about indigenous people’s role in Canada’s past, said Bianchi, indigenous rights program co-ordinator for KAIROS.

“Often, indigenous people don’t know the history themselves,” he said. “Sometimes the exercise is very emotional.”

The exercise was created by the Aboriginal Rights Coalition (collaborating with First Nations) in 1997 to promote understanding of a Royal Commission’s findings.

“The policies and practices displaced indigenous people and had a profound impact on their lifestyle and standard of living,” said Bianchi.

He noted indigenous people (also called Aboriginals) are poorest and have the lowest education standards, plus high rates of health problems and suicide.

“In the Prairies, an Aboriginal man has a greater chance of going to jail than high school,” said Bianchi. “Why is that the case?”

He said many governments in Canada have not honoured treaties with indigenous people like the First Nations.

“They have suffered and not shared in resources,” said Bianchi. “They have not benefited the way newcomers have.”

Citing the Caledonia standoff, he said Six Nations people are asserting their rights over the land. “They watched land promised to them whittled away over the years.”

“It’s interactive, you’re not sitting and watching someone talk,” he said.

About 20 people participated in the exercise, hosted by IDEA (Interfaith Development Education Association) Burlington and the Halton-Burlington KAIROS Committee.

At Saturday’s exercise, 15 colourful blankets from across Canada were used, some with handprints and messages.

Bianchi told participants not every little detail is covered during the one-hour exercise in history.

“But you will come away with a shared experience and a better, deeper understanding of the relationship with the indigenous peoples of Canada and the impact and how it shapes them today,” he said.Bianchi passed out maps showing treaty areas and how Aboriginal lands shrunk to one-tenth of one per cent of Canada’s land mass.

“They don’t really know us as a people, as a culture and as a nation,” was one Aboriginal quote.

Reflections on the Blanket Train

Blanket exercise plums the depth of injustice to aboriginals