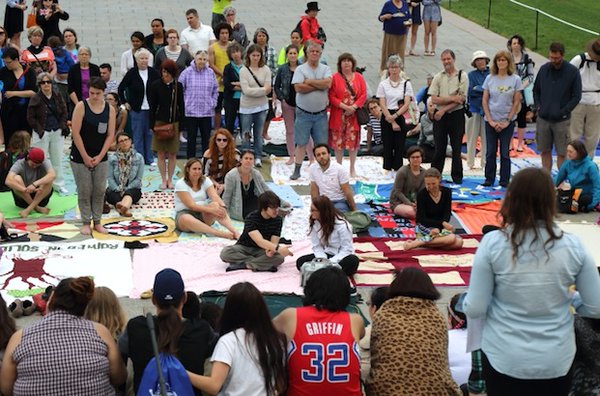 Originally published in the Anglican Journal on June 2, 2016, by Art Babych

Parliament Hill was the site of one of several KAIROS blanket exercises held in Canada from May 28 to June 5 to mark the first anniversary of the TRC’s Call to Action. Photo: Art Babych

KAIROS Canada brought its popular blanket exercise to the steps of Parliament Hill May 31 to help people understand Canada’s history from an Indigenous perspective.

“I think the idea of having it on Parliament Hill is excellent for many reasons… it’s where the people of Canada are represented, and this is Algonquin territory,” Gwynneth Evans, an active parishioner of Christ Church Cathedral in Ottawa, told the Anglican Journal.

KAIROS is a faith-based social justice organization of 11 Canadian religious organizations and churches, including the Anglican Church of Canada.

The event was part of a series of blanket exercises held at seven provincial and territorial legislatures as well as Parliament Hill from May 28 to June 5. The “Mass Blanket Exercise” marks the first anniversary of the release of the 94 Calls to Action by Canada’s Truth and Reconciliation Commission (TRC) June 2, 2015.

“What the blanket exercise is all about is teaching people a history that we don’t learn in school,” said KAIROS program manager Ed Bianchi in a Journal interview. “Education is identified by the TRC and Royal Commission [Royal Commission on Aboriginal Peoples] as key to a new relationship between Indigenous and non-Indigenous peoples in Canada. If we can add to that, if we can contribute to helping people learn the history that they need to know to foster reconciliation, I think we’ll have achieved something.”

Before the exercise began, First Nation Algonquin Barbara Dumont-Hill, who was born on the Kitigan Zibi Anishinabeg reserve, smudged those who came forward to take part in the Aboriginal purification tradition.

Before the exercise began, First Nation Algonquin Barbara Dumont-Hill, who was born on the Kitigan Zibi Anishinabeg reserve, smudged those who came forward to take part in the Aboriginal purification tradition.

For the exercise on Parliament Hill, colourful blankets were laid on the main walkway to the Centre Block to symbolize the lands of what is now Canada. Participants, representing First Peoples, removed their shoes and positioned themselves on the blanket of their choice. Narrated scripts were then used to help them imagine being transported back through time, to the arrival of the Europeans. As the dates progressed through contact with Europeans, the making of treaties, colonization, resistance and the establishment of reserves, the number of blankets diminished, leaving very little of the land for Indigenous peoples.

The blanket exercise was developed as a result of the findings of the Royal Commission on Aboriginal Peoples more than15 years ago; it was last updated in 2013. “It’s evolved over the years to what we like to call a humble workshop into a community-building reconciliation movement,” Bianchi said.

For some participants and observers, the exercise can trigger strong emotions. “I participated in a blanket exercise a few weeks ago, and it was incredibly informative and emotional,” the Rev. Monique Stone of the diocese of Ottawa told the Journal. “It made me want to do more about how my own journey is responding to the TRC,” she said.

KAIROS offers advice on how to use the blanket exercise: “The Blanket Exercise itself takes about half an hour to 40 minutes, and should always be followed by a talking circle of at least half an hour. It often raises deep emotions and we strongly encourage you to work with your head, heart, and spirit whenever doing the Blanket Exercise.”

Those wishing to use the blanket exercise for their faith community, classroom, workplace or other group should contact KAIROS.