Skip to content
Posted inArticles
Posted by By Jennifer Dany Aube May 14, 2012No Comments 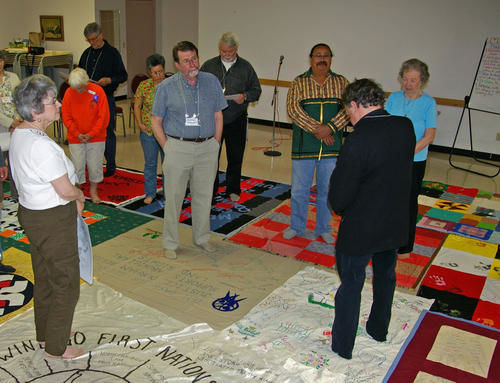 Originally published in The Intelligencer on May 14, 2012, by Ken Palmer.

Submitted photo Participants in the recent KAIROS-led session to better understand the plight of aboriginal people in North America take part in a blanket exercise.

Relations between First Nations peoples in Canada and non-native settlers have been difficult for centuries.

With that as motivation, a local group hosted an event May 12 which was intended to examine our shared history and to identify ways to improve relations.

Rev. Cathy Russell, Minister of St. Matthew’s United Church, began by acknowledging that the Massassauga people, now of Alderville, and the Haudenosaunee people, now of the Tyendinaga Mohawk Territory, originally occupied the land on which her church is built.

The first speaker was Greg Loft, a member of the traditional longhouse of the Haudenosaunee people in Tyendinaga. Mr. Loft spoke of the need for respect, open-mindedness, a good heart, and “a deep understanding of what to give thanks for.” He gave thanks to the stars, which help us navigate; the moon, which controls the tides; the sun, which provides the life, warmth, and energy we need to survive; and all that lives below and on Mother Earth, including the water that gives life, and the plants and animals that provide food, clothing, and shelter. He reminded participants that humans are to be caretakers of the land and each other, including their cultures and traditions.

Ed Bianchi, co-ordinator of the indigenous rights program at KAIROS Canada, shared a map dating from before the arrival of Europeans, showing where the millions of First Nations peoples were living in thousands of separate societies across all of what we now call Canada. Another map showed that aboriginal lands south of the 60th parallel are today mainly in reserves, and make up less than one-half of one per cent of the Canadian land mass.

Bianchi then conducted the “Blanket Exercise,” which tells the story of the loss of land. Blankets from First Nations people across Canada were laid out roughly in the shape of Canada. Participants in the event were asked to think of themselves as First Nations people. They walked, in bare or stocking feet, across the blankets, while Bianchi read a history of First Nations people, with the result that, eventually, only a few participants remained on a few small and isolated blankets.

The final formal activity of the day involved an introduction to the United Nations Declaration on the Rights of Indigenous Peoples (UNDRIP), which was adopted by the U.N General Assembly in 2007. Canada is one of only four nations to vote against adoption, still has given it only limited endorsement and is the only nation to have voted against adoption twice. The Supreme Court of Canada, however, has recognized the existence of rights of Aboriginal title.

Before leaving, participants had an opportunity to reflect on the day. Many reported feeling “disturbed,” “outraged,” “embarrassed,” and “ashamed” about the treatment of First Nations people and the current federal government’s refusal to endorse UNDRIP. Participants acknowledged ignorance about our shared history, and also about current conditions on reserves. Participants stated a need to educate non-native communities, to build connections with First Nations communities, and to pressure governments to make significant, positive, and long-term changes.

Blanket exercise plums the depth of injustice to aboriginals

KAIROS at the Quebec National Event of the TRC