Skip to content
Posted inArticles
Posted by By KAIROS Canada December 14, 2018No Comments 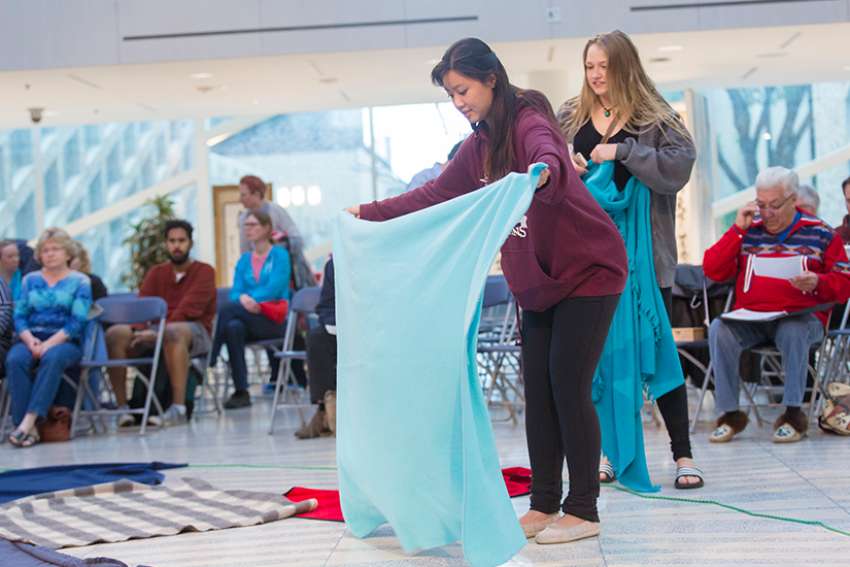 Student volunteers prepare for a Kairos Blanket Exercise at Edmonton City Hall in 2016. The Exercise was created as an interactive way of learning Indigenous history.

In the wake of the Truth and Reconciliation Commission’s call to include more study on Indigenous issues in school curriculum, it appears educators across the country are taking the recommendations to heart.

In its second report card on how Canadian provinces have responded specifically to TRC Call to Action #62 — “to make age-appropriate curriculum on residential schools, Treaties and Aboriginal peoples’ historical and contemporary contributions to Canada a mandatory education requirement” — the social justice organization Kairos has found most provinces have shown signs of progress.

Since the TRC report’s release in June 2015, Kairos has graded provinces and territories on their public commitment to and implementation of Call to Action #62, one of 94 recommendations by the commission. The latest report card released in October shows that in every jurisdiction outside of Quebec there has been significant improvement since Kairos issued its first report card in 2016. The western provinces lead the way, not surprising as they are the areas of Canada with the highest concentrations of Indigenous peoples.

“Most provinces and territories are making progress towards implementing TRC Call to Action 62.i.”

For Dawn Maracle, a Mohawk woman from the Tyendinaga Mohawk Territory in Ontario and Kairos’ Indigenous rights co-ordinator, it’s a start. She recognizes the “new vigour and drive for people to know that this is important,” but it’s only the first steps on a long journey.

“We have decades and decades of work to do,” said Maracle. “It’s only just the beginning.”

Quebec appears to have the most work to do. While the report card acknowledges the province recently revised its school curriculum to include mention of residential schools, “the province did not consult with Indigenous people in its inclusion and there is concern about bias and inaccuracies.”

Maracle admits the report is not a deep-level survey — it doesn’t analyze the curriculum or track the Indigenous people hired to help with curriculum  — but she said it does show the TRC message is out there.

Toronto’s Notre Dame High School has recognized that more needs to be done in opening up the conversation surrounding truth and reconciliation and over the last year and a half has put together its own piece of “reconcili-action.” In the wake of the TRC, students created Minotatemiskatowin — A Journey to Reconciliation, a presentation that has been staged at the school and most recently performed for MPs and senators in Ottawa Nov. 26 (Minotatemiskatowin is a Cree word meaning good relations with one another). The performance details the impact of colonialism through the lens of sisterhood manifested as MMIWG (missing and murdered Indigenous women and girls). The goal is to educate and start towards reconciliation within the school.

Reshida Nezirevic is vice-principal at the all-girls’ high school in Toronto’s east end. She said each year students try to undertake an interdisciplinary project to “develop a better understanding and appreciation of where their curriculum is actually tied to other subject areas.” This allows the girls to examine “real-world problems or issues” in the classroom, she said.

“This was really our opportunity to look at how we can pull all of this together, how can we not only be teaching our students about some of the prevalent issues that have been ongoing and maybe not as often discussed in the classroom around Indigenous issues,” said Nezirevic. “But let’s also look at how we can infuse this across our curriculum so that there’s a broader appreciation, and looking for links we can make across subject areas.”

It’s an area Toronto Catholic District School Board officials had seen a growing interest in even before the TRC’s recommendations. For the past decade, Vanessa Pinto has been at the forefront in Indigenous education with the board, and has seen an enthusiasm in her colleagues.

“The efforts are there and they are being done in authentic, intentional and meaningful ways because at the end of the day, Indigenous education is not only for Indigenous students, but for all students,” said Pinto, one of two Indigenous Education Central Resource teachers with the TCDSB.

It’s not the goal to portray residential schools in a good vs. evil spotlight, said Pinto.

“It’s not to make us feel bad as Catholics (who ran many of the residential schools),” said Pinto. “It is a responsibility so that our students know that it can’t happen again and shouldn’t happen again.”

Like Maracle, Nick D’Avella knows there is still a long way to go. The TCDSB’s Superintendent of Equity, Diversity and Indigenous Education said curriculum is focusing on reconciliation and acknowledging the history of past relationships. He notes the social studies curriculum has already been “Indigenized,” and includes expectations of the history of Indigenous peoples and the history of residential schools.

“What we do going forward is really essential,” said D’Avella. “There is a momentum building. The hope really lies in the authentic engagement of teachers and leaders in the schools to sustain this.”

Pinto said Indigenous education is far from being a “fashionable” subject that will lose steam as Indigenous issues fade from the media spotlight, and credits educators for keeping momentum going.

“You can see all our staff doing really good work in incorporating Indigenous studies into the curriculum,” she said. “People are wanting to do things correctly. And we can’t ask for anything more.”

That’s all good news to Maracle. But she has seen the peaks and valleys in more than 20 years engaged in Indigenous advocacy. Still, she is confident schools are on the right path. “The TRC has brought a new vigour and drive for people to know that this is important,” said Maracle.

“The ministries of education are becoming more responsive to these important reports and recommendations and calls to action that have happened over the past 20 years, but also the will of the people.”

Nezirevic sees the girls at Notre Dame “coming to a place of understanding” through such efforts.

“With greater and better understanding and awareness of the events that have occurred, it means the girls are more informed about their past. And that’s the kinds of information you want to be using in their future decision-making. It’s also about the teaching they pass on to future generations,” she said.

Written by Mickey Conlono and originally posted on December 13, 2018 in the Catholic Register.

“We’re definitely not the best nation in the world,” school children learn about colonialism