Skip to content
Posted inArticles
Posted by By Connor Sarazin January 8, 2019No Comments 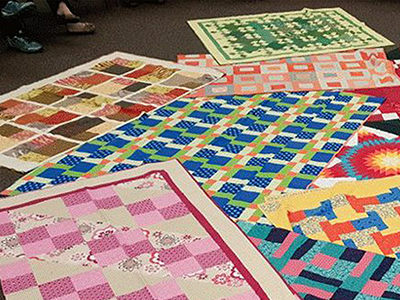 It was like gazing at a map of the world, but one turned upside-down.

The KAIROS Blanket Exercise is a two-hour journey through 400 years of tragedy, and it evokes a powerful sense of the wrongs Indigenous people have suffered at the hand of European colonists and their descendants.

The exercise came to Sarnia in a hall at Canon Davis Anglican church on a Saturday morning in late November. It began with Turtle Island and the creation story of the Anishinaabe people.

The tale describes how Turtle Island (Mother Earth) came to be. Here, for more than 10,000 years, particularly in what would become Canada and the Northeastern and Midwestern United States, the Indigenous people roamed the land freely.

Ten quilts laid on the floor represented Turtle Island, and the 30 participants were invited to wander freely on the blanket quilts in a participatory exercise.

As Indigenous history unfolds through narrators, the removal of some blankets becomes a metaphor for disappearing lands and relocation to reservations. As participants squeeze together on the remaining and now isolated blankets, it becomes a visual demonstration of the fate of First Nations.

Participants experienced a traditional smudging ceremony, or smoke bath, to purify the body and drive away negative energy at the beginning and conclusion of each exercise.

The Blanket Exercise was developed by the KAIROS organization in Canada in response to the 1996 Royal Commission on Aboriginal Peoples report. KAIROS Canada is a confederation of 10 churches and religious organizations working to promote justice and human rights.

In Greek rhetoric, “kairos” designates “a passing instant when an opening appears which must be driven through with force if success is to be achieved.”

Facilitators for the exercise were Rev. Mark Loyal, a Mohawk, and his colleagues from St. John the Baptist Anglican Church on Walpole Island. Kairos Canada says the blanket exercise helps participants learn a history most Canadians are never taught.

Later, in a “talking circle,” an eagle feather was passed to each participant, who was encouraged to describe the effect the exercise had.

For many people that Saturday morning, appreciating the perspective of Indigenous people of Canada and their reverence for the land of their ancestors was a mind-expanding and emotional journey.

Written by Phil Egan and originally posted on January 6, 2019 in The Sarnia Journal.

Needs Improvement: Educators make progress on Indigenous curriculum, but more work to do

Christians working on global issues can be a thankless job